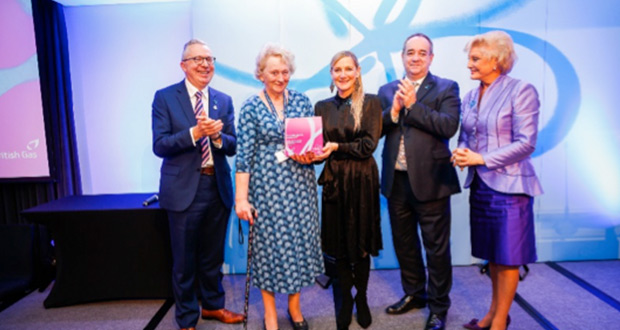 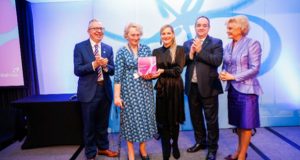 An “inspirational” former carer has won a national honour for her efforts to help people with dementia and their loved ones.

Val Brown was presented with the Uniting Against Dementia – Outstanding Contribution honour at the 2017 Alzheimer’s Society Dementia Friendly Awards.

The 79-year-old has been involved with Alzheimer’s Society for the last 28 years and has backed the charity’s efforts to break down taboos and find a cure for dementia.

Valerie organised a Memory Walk in 2016 and raised £2000 but she is not only committed to fundraising but also for people to have a better understanding of dementia.

And being a former carer she knows the difficulties and stigma that can still be attached to having dementia and does all she can to raise public understanding  through Dementia Friends awareness sessions.

Val, who lives in Oswestry, Shropshire, said: “My work started in 1989 and I am the only person going from a group of 30 volunteers.  I am very humbled as there were some fantastic people nominated.

“I am going to show this award to people back in Shropshire and Telford: I couldn’t have done it without my fellow volunteers and the colleagues at Alzheimer’s Society.”

The winners were announced at the prestigious awards ceremony that took place in London which was attended by Health Secretary Jeremy Hunt and hosted by Alzheimer’s Society ambassador Angela Rippon.

Mr Hunt said: “Tackling dementia is one of my top priorities as Health Secretary and I want the UK to become the best country in the world for care, support, research and awareness – so I am proud to support these awards and listen to the stories of these inspirational campaigners.”

Val was one of three finalists in her category, sponsored by British Gas. This award celebrates an individual, team or organisation in recognition of their outstanding contribution to improving the lives of those affected by dementia.

Dianne Beaumont, Services Manager, for Alzheimer’s Society in Shropshire said: “It is amazing that Val has won the Uniting Against Dementia – Outstanding Contribution 2017 award and it is a testament to her tremendous dementia friendly work.

“The level of nominations received this year was truly phenomenal and there were some exceptional stories heard at the awards ceremony. All the finalists and winners at the Dementia Friendly Awards have demonstrated how we can unite against dementia and support those affected by the condition.”