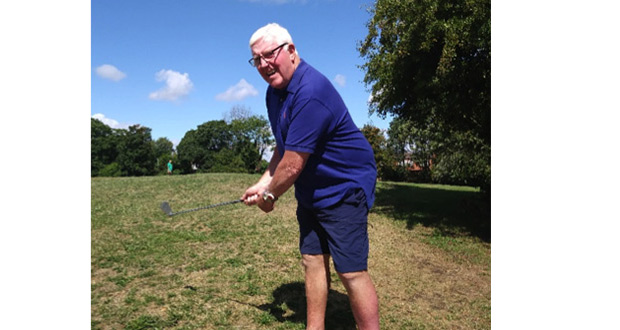 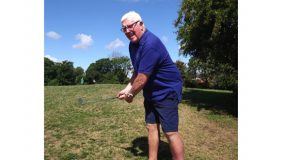 A community client at Belong Macclesfield care village is surpassing all expectations by learning to play golf again, less than three years after suffering ischemic strokes in 2015 and 2016.

Michael Fleming, 77, has become a regular visitor of the dementia-championing care village over the past eight months, making great use of the gym facilities as well as the specialist SilverFit virtual reality equipment used for stroke rehabilitation. A keen sportsman (having played professional football for Macclesfield Town in his teenage years as well as cricket and squash until the age of 65) his strokes had a devastating effect, leaving the left side of his body incredibly weak to the point where even walking became a struggle.

Not one to be defeated, however, Michael has put in a huge amount of effort to keep himself active and healthy. With the help of Belong’s exercise instructors and his physiotherapist and occupational therapist, he has developed his arm strength and flexibility in order to hold a golf stick and play his favourite game again.

Barbara Tait, lead exercise instructor at Belong Macclesfield, said: “We are so proud of Michael for all of his hard work and perseverance. At Belong, we make a conscious effort to work with any outside services in order to gain the best results for our customers, and we are so pleased that through our collaborative work with his physiotherapist and occupational therapist, Michael has achieved something he never thought possible. His story is absolutely inspirational, and I hope it encourages those who have suffered a stroke to realise that their goals are definitely still achievable.”

Michael said: “I’m absolutely thrilled to be playing golf again and I am so grateful to my exercise team, without whom none of this would have been possible. My biggest thank you, however, goes to my wife Judy who helps me with everything, including driving me to my exercise sessions!”

This October, Michael will be back in the gym to take part in the care village’s Cycle Marathon fundraiser, where members will cycle a collective total of 140 miles to raise money for the village’s activity fund. This journey will match the real-life efforts of the Belong cycle team, who are completing the C2C Tynemouth to Whitehaven route over 4 days.