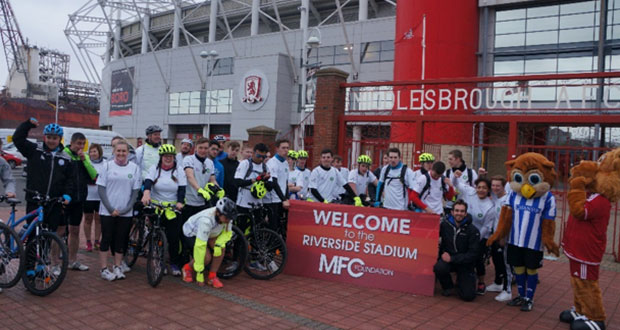 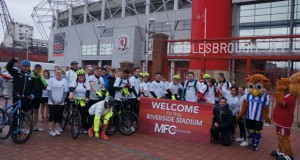 RideforEric organises a yearly bike ride fundraiser to mark the life of Eric Codling, who was tragically killed by a reckless driver when cycling in November 2013.

The event, which took place 10th to 11th April, raised awareness of cycling safety as well as funds for the charity and the Sheffield Wednesday FC Community Programme.

Wendy said: “Hill Care operates care homes in Sheffield and Middlesbrough so when we heard about the cycle ride to raise awareness and funds for charity RideforEric I was extremely keen to get involved.

“As well as sponsoring the event, I wanted to show my personal support by attempting to cycle the last 30 miles of the route in Middlesbrough. I’ll be glad to have our Estates Manager Anthony alongside me as well as Marcia and Liz at the finish line – albeit dressed as an Owl and Lion.”

The NCS is a national government programme also run by Middlesbrough FC. Hill Care homes in Sheffield, Stockton-on-Tees and Middlesbrough have been working closely with both clubs’ services to provide teenage participants with opportunities to work with elderly people.

Wendy added: “The Laurels and The Limes Care Home in Sheffield and Mandale House Care Home in Stockton, in particular, have benefitted greatly from working with the club’s NCS volunteers.

“The teenagers have hosted coffee mornings, served tea and scones, participated in activities, put on shows, delivered hand and neck massages and more. Our residents thoroughly enjoy their company and we hope to continue working with them in future.”

Eric’s wife Karen Codling said: “Eric, like thousands of people around the country, loved cycling and, although the pain of the tragic events that led to his death remains, it’s rewarding to see how many people we’ve supporting over the last few years.

“It has also enabled us to run the Hills2Boro event, which was borne from me being a Sheffield Wednesday fan and Eric supporting ‘the Boro’. He once proudly cycled from one destination to the other in a single day and this memory gave me the inspiration for the ride.”

Alongside Hill Care, the event is being sponsored by law firm Irwin Mitchell, where Karen is an Associate Director, as well as sportswear retailer Decathlon and events company VeryCreative.