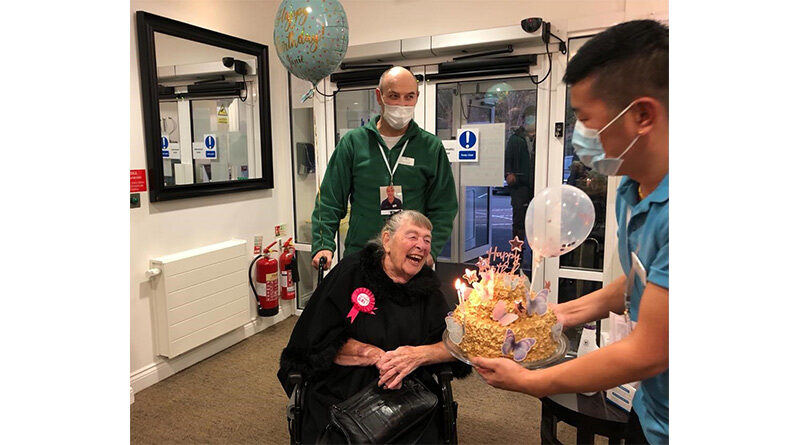 Janie Street, a Gracewell of Church Crookham resident, has been taken on a ‘This is Your Life’ tour in celebration of her 80th birthday.

Janie, who was born in Farnborough, has spent most of her life in the local area.

Asked how she wanted to celebrate her milestone-birthday, Janie said she only wanted to see her son who had been unable to visit her due to ill health. In response to Janie’s request, Gracewell of Church Crookham worked closely with her son to devise a special plan which would take her on a tour of local places where she has fond memories, while adhering to social distancing guidelines.

The first stop in the Gracewell of Church Crookham minivan saw Janie visit the house where she was born in 1940 and lived until she was 14 years old. After then visiting the home she lived in until she married, Janie was taken to the church where she married her husband Peter.

The tour then moved on to her first marital home which Janie and her husband named ‘Laerchenwald’ after their honeymoon resort in Austria, a name it continues to bear 60 years later. While visiting this house, Janie recalled how she revisited the honeymoon resort with her husband to celebrate 25 years of marriage together.

Janie was also taken to various other locations, including to her brother’s house, where friends waved as they passed by, followed by driving past the Pyestock area where she worked and met her husband.

The last leg of the trip took Janie to her previous home where she lived for 44 years before moving into Gracewell of Church Crookham. Here, Janie was delighted to be surprised by her son who had also arranged for the neighbourhood to come out and sing Happy Birthday for her.

Returning to Gracewell of Church Crookham, Janie was treated to a surprise birthday party with residents and team members at the care home. Here, she was presented with a wonderful birthday cake, presents, drinks and a singalong to round off the most-memorable day.

After her celebrations came to an end, Janie remarked how she had “a wonderful day” that she’ll “never forget”.

Speaking of Janie’s ‘This is Your Life’ tour, Racquel Barretto, the General Manager of Gracewell of Church Crookham, said:

“To celebrate Janie’s special birthday, the Gracewell of Church Crookham team were determined to organise an event which would match this momentous occasion. It was hugely enjoyable to work with Janie’s son to learn so much about her life and organise a fantastic tour around the local area.

“On the day, Janie had a brilliant time and all of those who accompanied her on the tour made special memories of their own which they will cherish in the years to come.”