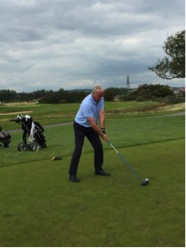 A charity golf tournament, hosted at Machynys Golf Club on the South West coast of Wales, has raised a grand total of around £14,000 for Barchester’s Charitable Foundation.

The event took place from the 9th September to the 10th September and saw keen golfers from Barchester and its suppliers enjoy a competitive charity tournament in glorious weather.

A charity dinner was held at the golf club after the last day of the action-packed event where everyone applauded as the winners of the tournament and the total amount raised were announced.

Barchester’s Charitable Foundation supports older people and adults with physical or mental disabilities to gain increased independence and lead dignified and fulfilling lives. The money raised will enable the Foundation to help even more individuals across the UK who could benefit hugely from a charitable grant.

Helen Maiello, a strong supporter of the Foundation and former Divisional Director at Barchester Healthcare, hosted the two-day tournament.

Helen Maiello said: “A heartfelt thanks to everyone who joined or supported the Barchester Golf Masters. Barchester’s Charitable Foundation has raised many thousands of pounds since its inception and continues to donate to worthy local causes every week. Events such as the golf are hugely important in enabling the continuance of its great work. “

Mike Parsons, Chairman of Barchester’s Charitable Foundation, said: “The event was really successful and such fun to be part of. Barchester’s CEO Pete Calveley is looking forward to taking the golf back to Castle Stuart in 2016, to continue this fantastic annual event. We are immensely thankful for everyone’s support and generosity, and the money raised will make a huge difference to all the people we help. “