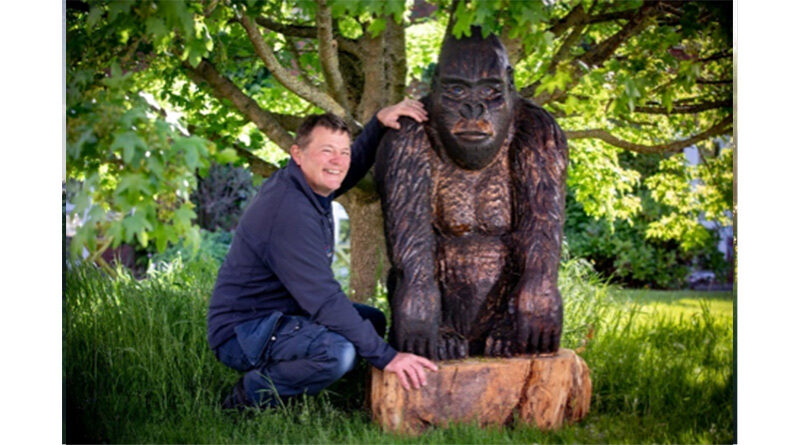 The giant ape has taken pride of place among a magnificent menagerie of wooden wild creatures at the Pendine Park care organisation in Wrexham where Paul  works as part of the gardening and maintenance team.

The leafy 11-acre grounds were already home to a grizzly bear, giant squirrels, owls and hawks.

Paul, 56,  wanted to add a bit of colour to brighten up the lives of the residents.

The former art student discovered he had chainsaw carving skills by accident after deciding to make a garden owl for his wife’s birthday.

According to Paul, his trusty chainsaw buzzed into action again after he spotted the gorilla “hiding” in a huge chunk of felled maple tree.

He was inspired to carve the gorilla because Pendine Park proprietors, Mario Kreft MBE and his wife, Gill, are keen conservationists and have been on several gorilla trekking expeditions in Africa.

Paul said: “I see a piece of wood and can just spot the subject staring back at me, in this case, a gorilla for Mario and Gill.

“I started out carving owls, squirrels and the like from wood that would otherwise go to waste. I think it gives residents something to look at and brightens up the garden.

“I then carved the big bear in memory of Mario’s late father who many years ago travelled the world as a bear and lion trainer in the circus.

“The bear now stands on display at the rear Highfield House Care Home and is in a place where residents can see it whenever they look out at the gardens.

“I knew Mario and Gill have a real love of gorillas and other great apes so when we had to bring a tree surgeon in to fell an old maple tree that was in as dangerous condition I asked him to leave me a good sized piece for a carving.

“The block he left me was a good five feet high and almost three feet wide and weighed close to a tonne I suspect. I managed to get it to the barn using a big digger we had on hire so it was undercover.

“I asked Mario if I could carve a gorilla and he seemed really pleased. His only stipulation being he wanted the carving to depict a thoughtful and peaceful gorilla not one that was angry and threatening. I don’t think he wanted a King Kong around Pendine Park!”

“Gorillas make a great subject and if we are honest, they are more intelligent than humans. They don’t kill each other, destroy their own world or waste time and energy stressing over how they are going to pay a mortgage.”

Mr Kreft is delighted Paul’s latest design is a gorilla.

He said: “Gorillas are gentle giants and display many human-like behaviours and emotions, such as laughter and sadness.

“In fact, gorillas share 98.3 per cent their genetic code with humans, making them our closest cousins after chimpanzees and bonobos.

“Paul is hugely talented and his chainsaw creations add interest to the gardens. I know how much residents like seeing them.

“I’m really looking forward to seeing the gorilla carving unveiled. The bear Paul carved in memory of my father is fantastic.

“My late father, Franz, worked as a circus animal trainer particularly with bears and lions so the sculpture of the bear also means a great deal to me.”

He said: “He uses wood from storm damaged or diseased trees we have to cut down.

“Instead of the wood going to waste or just being burned it’s been given a new lease of life and the sculptures really add something new and interesting to our gardens.”