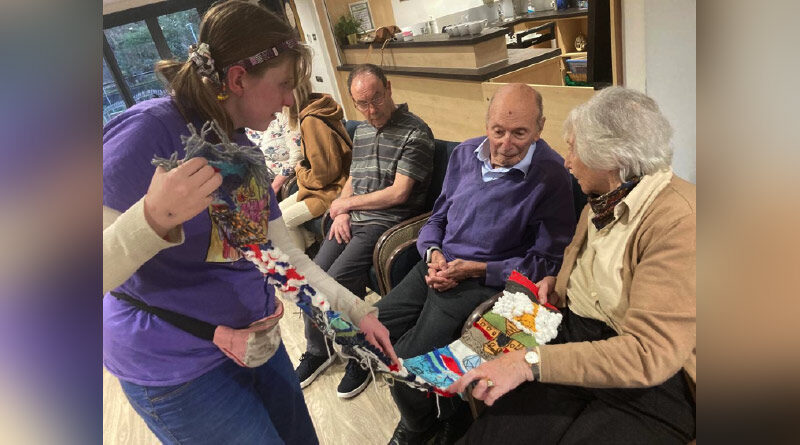 Older and younger generations have come together to share lesser-known personal stories of Manchester people’s experiences during the Holocaust and the Second World War, ahead of Holocaust Memorial Day (January 27th).

The visiting group of ‘Creative Activists’ offered an insight into their creative outputs with the Didsbury care village’s customers, including poetry, playwrighting, and textile manufacturing. Their creations are set to be showcased in a programme of events and workshops at the museum on January 27th, aiming to connect the untold stories inspired by the museum’s collections, with local people.

In return, the guests had the chance to meet and greet residents, some of whom include Holocaust refugees and survivors, who shared an exhibition in their home’s on-site synagogue documenting their own stories, whilst honouring the millions of Jews who suffered persecution in the hands of the Nazis.

Aged 16-30 and from a number of different faiths, the Creative Activists join the project from King David High School and The Manchester College, and have been working alongside Manchester artist, Becky Prestwich, putting together the public event, ‘We Remember Them In Verbs’, for Holocaust Memorial Day 2023.

Angela Luckett, religious and cultural coordinator at Belong Morris Feinmann, said:
“We’re especially pleased to host our new friends. Our care village foundations were borne out of the Jewish plight, and similar to Manchester Jewish Museum and the Creative Activists, we believe it’s imperative to preserve history for future generations.

“It means the world to our customers to see this work happening, as well as being afforded the opportunity to communicate their own experiences with young people. We’ve also been invited to the museum later this month and we’re looking forward to seeing the full exhibition up-close.”

Gemma Meek, programmes manager at Manchester Jewish Museum, added:
“Our visit to Belong Morris Feinmann was a beautiful experience. Young Creative Activists, Sally and Izzy, shared their work and were met with such kindness and understanding from the residents.

“We feel incredibly honoured to have heard some of the residents’ own experiences, journeys, and memories and we look forward to welcoming the group to Manchester Jewish Museum as part of our newly created friendship with them.”