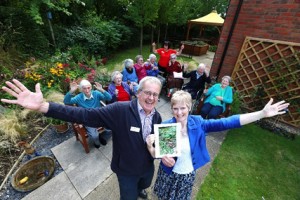 A Salisbury residential and nursing home is celebrating the latest in a series of accolades for the excellence of its garden.

Awarding their top, specially conceived ‘Gold Gilt’ prize, judges at the Salisbury City Council Garden Awards praised Braemar Lodge for “creating a personal and emotional space with the residents at the very heart of it”.

The Gold Gilt follows a straight Gold in the same awards scheme last year and a Silver Gilt in 2013.

For the second year in succession, Braemar Lodge has also seen off the challenge of 18 other Colten Care homes to win Best Overall Garden in the operator’s own in-house gardening contest.

Head Gardener Charles Hubberstey applauded the work of Braemar Lodge gardener Lesley King and others at the Stratford Road home including a residents’ garden club.

Charles said: “Lesley is an excellent gardener with tremendous skills. At the same time, every resident and team member embraces the garden and sees it as an integral part of the home. It’s that combined appreciation and input that makes it such a special place. The City Council judges had to create the Gold Gilt specifically for Braemar Lodge as they didn’t have another category good enough.”

In their citation, the City Council judges praised the “interaction between the people who live at Braemar Lodge and their surroundings”. They added: “This garden has a wonderful continuity that runs right through it, making so many places for residents to sit either alone or as a community. Everything is created with the residents in mind, with stimulation wherever you look.”

The judges specifically complimented features such as a bug hotel, insect-friendly plants and raised fruit and vegetable beds that are within easy reach of residents using wheelchairs.

Home Manager Alison Bremner said: “We’re thrilled to have won the top gilt award. It really does recognise the fact that this beautiful garden brings so much satisfaction to the residents. It’s theirs to enjoy and they, Lesley and other team members will continue to evolve it year by year.”

Runner-up for the Best Overall Garden title in the Colten Care competition was St Catherines View in Winchester while Best Floral Welcome went to Avon Cliff in Bournemouth.