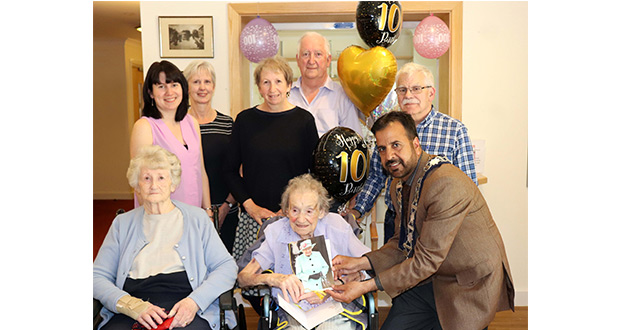 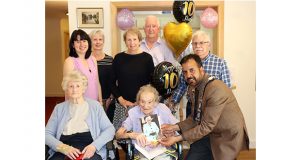 Frances Woolnough, a resident at Chesham Leys nursing home run by The Fremantle Trust, enjoyed a special party with family and friends on Monday 17th June to mark becoming a centenarian.

The Mayor of Chesham, Cllr Qaser Chaudhry, joined Frances for the occasion and presented her with her official telegram from the Queen.

Frances is extremely proud of her family, which includes seven grandchildren and 11 great grandchildren, who she loves spending time with.

She lived most of her life in North West London and left school in 1935 to work at Burroughs Wellcome until she married in 1940. After the war, they moved with their children to Kingston in Surrey.

During her lifetime, Frances has witnessed great changes such as the introduction of TVs, phones, air travel and the NHS service. When asked the secret to a long life, Frances said it was down to ‘good genes’.

Simon Meredith, manager of Chesham Leys, said: “We were thrilled to share Frances’ special celebration with her. She is a remarkable lady and it was a delight to see her turning 100 surrounded by all her family and friends.”