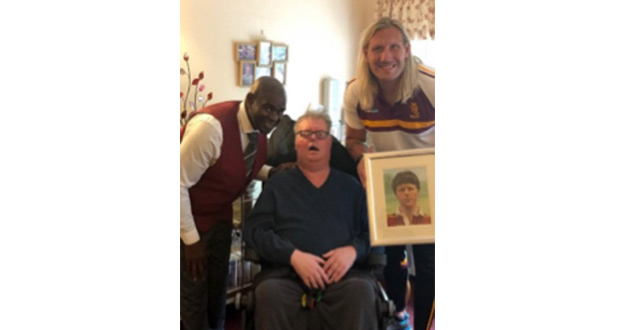 A former player for Huddersfield Giants Rugby League team who has been severely affected by a brain tumour got a surprise visit from the club’s star and former England international, Eorl Crabtree.

Val Holmes sketched a portrait of her husband Nick Holmes for their 20th wedding anniversary, which depicts him during his career with the Giants.

The sketch is based on a photo Nick shows everyone and is his fondest memory since developing a brain tumour in 2004. A stroke in 2018 has left him unable to speak, walk or swallow.

Nick’s brother-in-law Merv Pemberton, Funeral Service Operative at Funeral Partners West Yorkshire, knew how much the sketch would mean to Nick so contacted Area Development Manager Keith Clegg to make an occasion of presenting it.

Keith got in touch with his wife’s cousin Anne Hough, Director of Huddersfield Town Football Club, who arranged for former Huddersfield Giants player Eorl to surprise Nick at his residence in Herncliffe Care Home with the drawing.

Keith described: “Nick only gets out of bed twice a week with little quality of life and playing for the Huddersfield Giants is the only thing he’s upbeat about.

“We had to organize something special for his 20th wedding anniversary and he just couldn’t believe it when Eorl walked in with his favorite memory.”

The two Huddersfield Giants sportsmen communicated at length about Nick’s career with the club, which spanned from 1979 to 1981.

Eorl said: “It’s always great to visit one of our ex-players and share stories about playing the greatest game.

“Nick is a great character and it was an absolute delight to meet him and make this presentation with Keith and Merv from Funeral Partners. I wish Nick all the best for the future and all the best to his whole family.