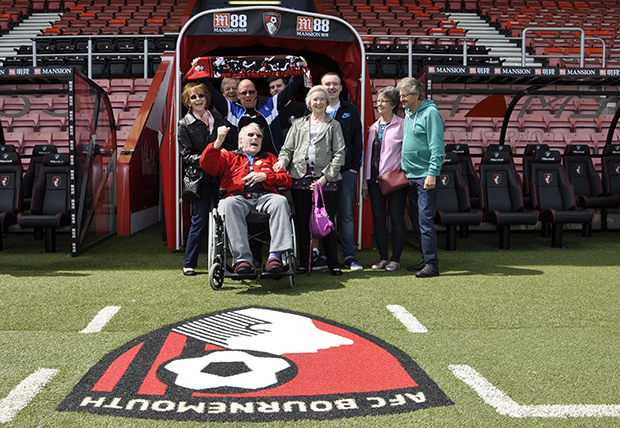 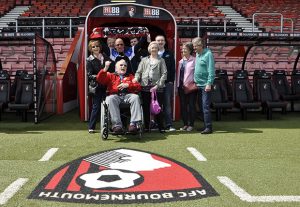 A former bandmaster now in receipt of end-of-life care has been enabled to revisit the hallowed football turf where he once led half-time performances.

Bill Magookin is co-founder of the Bournemouth Carnival Band and a long-standing fan of Premiership side AFC Bournemouth.

In response to a family request, staff at his care home in Longham, Dorset, arranged a surprise tour of the club’s Vitality Stadium which, as Dean Court, was a venue Bill played at in the 1980s.

Dressed as superheroes such as Batman and Spiderman, the band has been a popular act at fetes, carnivals and civic parades since its first gig at Upton Carnival in 1983.

Ex-serviceman Bill, who played the bugle and was often seen out front as Green Goblin or Penguin, was a co-founder along with three others. Initially members were recruited from the Pokesdown & Southbourne Ex-Servicemen’s Club.

On the stadium tour, Bill was joined by Susan, his wife of 58 years, son Martin and grandchildren along with various bandmates. He was even afforded a bugle salute in his honour.
Bill said: “It’s absolutely wonderful to come back. I remember playing here two or three times at half time with the band, though on one occasion we weren’t allowed to go on because they were concerned about the state of the turf. Now, this is a more beautiful stadium. It’s been improved a lot. The club do a great deal for disabled fans and make a lot of people very happy, depending on their results!”

Band secretary Alan Hooker said: “We wanted to come along and support Bill. Without him we wouldn’t have had a band. It’s always been about fun and raising money for local charities.”
Originally from Ireland, Bill was an army drill sergeant serving in the 16th/5th The Queen’s Royal Lancers cavalry regiment.

Kate Morris of Colten Care’s Fernhill care home, who accompanied Bill on the tour, said: “It was a lovely experience to see him revisit the stadium with his family and former bandmates. A huge thank you to everyone at AFC Bournemouth for helping us grant Bill’s family’s wish and enabling him to come.”