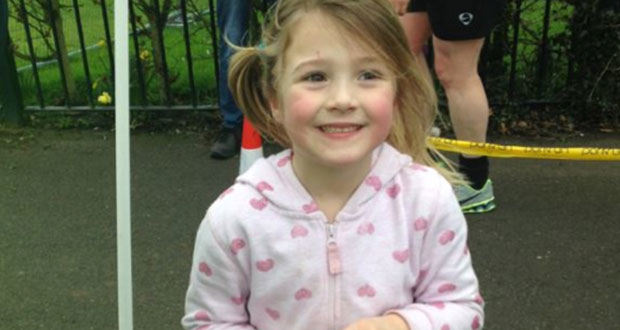 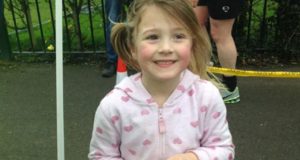 An energetic five-year-old has become one of the top fundraisers for Alzheimer’s Research UK’s new fundraising challenge Running Down Dementia.

India Mackie has raised a fantastic £523 for vital dementia research within less than a month of the initiative starting – placing her in the top ten of more than 2,300 fundraisers.

Running Down Dementia challenges participants to run 100km over summer 2016 and raise £100 for Alzheimer’s Research UK.

The charity has launched the mass participation running event with parkrun, which offers free timed 5km runs across the country, as the organisation’s official charity partner.

India, though only five, has already clocked up 19km through participating in the 2km Guildford junior parkrun in Surrey on Sundays with her dad Ian, in addition to other runs near home.

Known as ‘The Indian Running Duck’ on the Running Down Dementia leaderboard, India is tracking her progress with stickers on a wall chart whenever she completes a run.

“I’ve just started running with my dad, and it’s even more fun when my friends do parkrun too. I always feel good at the end, especially with an ice cream!

“If I run 100k over summer, we will be raising money for research to help people remember the names of people they love, and also if they like peanut butter on their toast!

“100km is a long way, but we are doing lots of little runs to add to our chart to raise our money.”

India’s mum Lisa Mackie signed India up to parkrun because she is “so full of energy”, and said she is “incredibly proud” to see how far she has come.

“She’s very young so she’s still getting into the mind-set of parkrun. Rather than thinking about personal bests she just likes to enjoy the run, and will wait for her friends to catch up with her.

“We moved to Guildford last year and were looking for ways to become part of the community.

“All the locals are quite active and really proud of where they live, and Guildford parkrun embodies the community spirit. India has now done six parkruns and it’s become part of our weekend.

“We didn’t hesitate to get involved with Running Down Dementia and we’d signed up within a day.

“Both mine and Ian’s families have been affected by dementia and it’s a cause close to our hearts.

“We’re really proud of India and hope we can continue fundraising.

“She’ll be especially excited to receive an Alzheimer’s Research UK t-shirt because her favourite colour is orange.”

“Wow, how amazing of India to have done all this at just the age of five, we are so impressed with her fundraising efforts and her running.

“At Alzheimer’s Research UK we fund the most promising research into the preventions and treatments for dementia. We couldn’t do it without supporters like India and her family.”

To donate to India’s fundraising page go to https://running-down-dementia.everydayhero.com/uk/india or to sign up to Running Down Dementia go to www.runningdowndementia.org.