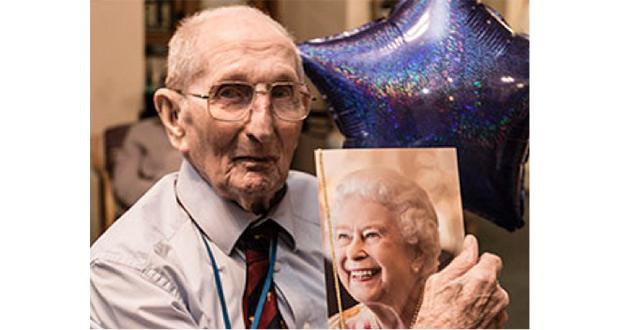 Old soldier and care home resident Charles Saunders was able to celebrate his 100th birthday in style thanks to the intervention of one of CQC’s Experts by Experience.

MaryAnn Richardson is an Expert by Experience (ExE) from Enham Trust, she regularly joins CQC inspections teams in care homes to talk to residents and visitors and get their views and opinions on the care which is then fed back to inspectors.

MaryAnn first met Charles Saunders in March 2017, when she joined a CQC inspection team as a CQC Expert at a care home in Kent. MaryAnn noticed that Mr Saunders spent all of his time in his bedroom and he told her that he was lonely and staff did not have time to chat to him.

Charles told MaryAnn about his life, including his time in the army during the World War 2 and being a prisoner of war in Poland. He was very proud of his service in the army and his regimental photograph was displayed on his wall. This information was not available to staff in his care plan and links had not been made to the British Legion or his old regiment, the Welsh Guards.  MaryAnn made sure that she shared this information with CQC’s inspector and the care home manager.

At that inspection the service was rated Inadequate, placed in special measure and served with three warning notices.

Inspectors returned to the service in October 2017 and asked for Maryann again as the ExE (because she knew the home and the people there and had communicated well with them at the previous inspection) as she had met people and was able to communicate with them. Again she found that Charles was isolated and had no one to chat to. With his agreement she contacted his old regiment and made arrangements for someone to visit him to celebrate his 100th birthday on 23 December 2017.

Following the inspection the provider decided to withdraw their appeal against the action that CQC had decided to take against them and close the home.

The inspectors informed MaryAnn that the home was going to close as they knew arrangements had been made for Charles’ birthday. Maryann was worried about him and his move to another service given his age and lack of family to support him.

With the help of the Welsh Guards MaryAnn was able to get Mr Saunders in to a local British Legion Home where he was able to celebrate Remembrance Day and his 100 birthday.

“I am so thrilled that Mr Saunders is able to celebrate his 100th birthday in a home where he is happy and where he is able to get the support he needs and deserves.

“When I first meet Charles during CQC’s inspection of the care home where he used to live, he mentioned that he felt very lonely in his room and how the staff didn’t make the time to chat to him. He really was quite isolated.

“In my role as the Expert by Experience on CQC’s inspection, Charles and I talked about the pictures in his room and I was particularly drawn to the one that held pride of place on his wall of him with his regiment – the Welsh Guards in 1939, which coincidentally, is the same as my husband’s.

“After the inspection, my husband contacted Mr Saunders’s regiment and with their help, he was able to move in to a British Legion care home, Maurice House, in the area.

“I am so glad that by taking the time to have a proper conversation with Charles during CQC’s inspection and to find out about his life – a simple thing that makes a care home not feel like a workplace – he is now much happier and able to celebrate his tremendous achievement in a place that he can call home.

“Charles’s Centenary Birthday celebrations were well attended by his old regiment and I was really pleased that he got the special day that he so deserved!”