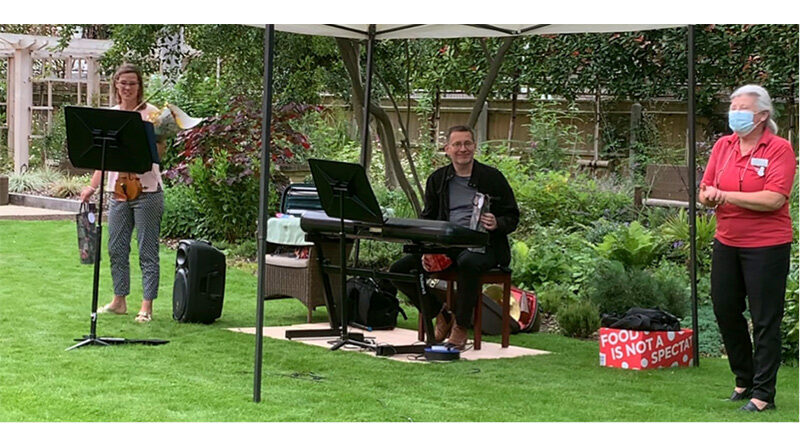 It’s not every day you have the chance to see and hear professional orchestral players performing live in your own garden.

But that’s exactly what residents at Colten Care’s Outstanding-rated Canford Chase in Poole were able to do thanks to a visit by musicians from the Bournemouth Symphony Orchestra (BSO).

And for the performers, there was added incentive to shine as the audience of residents included Brendan O’Brien, a former BSO leader and principal violinist who spent 29 years with the orchestra until his retirement in 2011.

There were tunes from musicals including Mary Poppins and The Sound of Music and even a classical take on Abba’s Thank You for the Music.

Team members at the Western Road home expressed thanks to neighbouring builders who downed tools for the duration to ensure there was no noise disturbance.

In addition, the timing was perfect as planned maintenance work inside the home meant power was briefly shut off but with residents gathered in the garden to hear the music, no-one was affected.

Brendan, who was married to the Irish violinist Anita Dunkerley, was first appointed leader of the BSO in 1968.

He said: “When I started with them, they were celebrating their 75th year and it was a wonderful season.

“David Oistrakh, one of the greatest violinists ever, played Shostakovich’s violin concerto and Rostropovich the cellist also played. It was a huge honour for me to be celebrating that wonderful time with them.

“Now, to be here as an old man, living in this nursing home which I like very much, it was a great pleasure for me to meet some of the present-day members of the orchestra and enjoy their playing. It would be great to enjoy a repeat of the experience.”

Canford Chase Companionship Team Leader Julie Wathen said: “The musicians wove a magical spell over our garden, with 17 residents watching the performance in hushed silence, their faces a picture of peace and contentment. There was complete stillness as everyone listened in awe to the beautiful music.

“There was obvious pride in Brendan as he spoke with Jenni and Kevin afterwards and I overheard Edna, another of our residents, say to the musicians that she found the performance ‘absolutely charming’.

“With our power briefly off for maintenance work, it could have been quite chaotic for the residents, but the garden became an oasis of peace for them. Thank you BSO.”