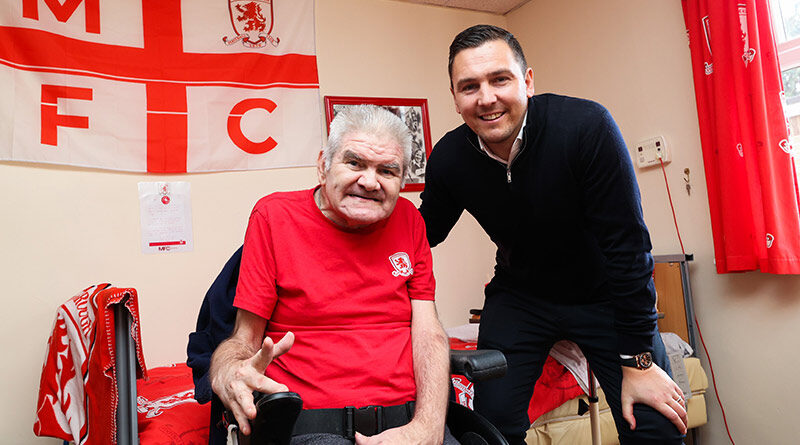 Massive Boro fan Paul Brown, a resident at Astune Rise care home, was speechless when former Middlesbrough and England star Stewart Downing turned up at the Eston care home for a surprise visit.

Paul 63, who has lived at Astune Rise for more than eight years, has never been to a Boro match despite being one of the club’s biggest fans. His room at the care home is a tribute to his favourite team, including curtains, flags and posters.

Having no family that visit it was left to home manager Caroline Bowstead to work with the football club, and commercial partner Vertu Motors, to make Paul’s dream come true.

Stewart Downing, who is Paul’s all-time favourite player, invited him, Caroline and Angela his keyworker to be his guest at the match against Bristol City, enjoying full hospitality and the chance to meet other players.

Caroline Bowstead said:
“Paul was due to go to the match against Blackburn on Saturday and was hugely disappointed when I told him it was cancelled. Little did he know this was because Stewart was visiting and offering him the best seats in the house for the November 5th game.

“They chatted away for ages and Paul decided Stewart should be the club’s next manager. I don’t think Stewart was so keen!

“Keeping it all secret until Stewart arrived wasn’t easy but it was worth it to see the look on Paul’s face when he spotted him. He beamed throughout the whole visit!

“I’d like to thank everyone, particularly Stewart, who made this happen. I don’t think they will ever realise what it meant to Paul and how happy he is. We’re looking forward to the match and win, lose or draw it will undoubtedly be one of the best days of his life.

“Paul is a huge part of our family at Astune Rise and I am so pleased we’ve been able to do this for him.”