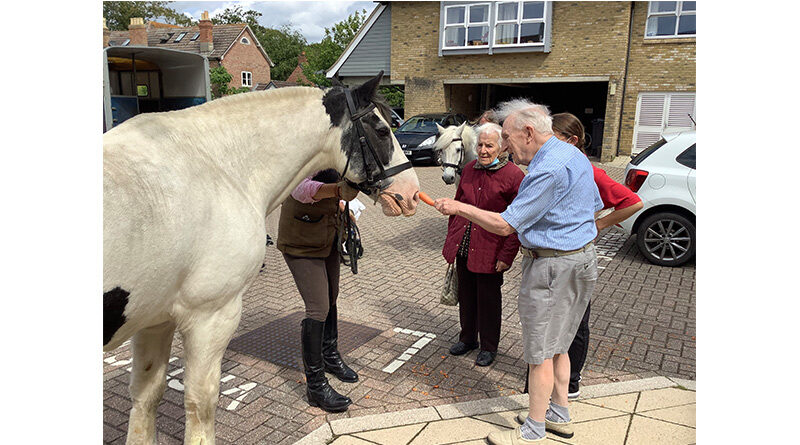 A pair of horses who normally work with young disabled people have brought joy to elderly residents of a Dorset care home.

Colonel and Elvis made a 15-mile round trip in a twin horse box from The Fortune College, a centre for riding therapy in Bransgore, to Colten Care’s Avon Reach home in Mudeford.

Their special visit served as a personal thank-you to Avon Reach resident and horse-lover Margaret Barnes who has contributed to Colonel’s living costs for more than 15 years.

Margaret first became involved with the college around 20 years ago when she was editing the New Milton talking newspaper for blind and partially sighted people in the New Forest.

She became interested in sponsoring a horse after hearing that a local bank provided support that way.

Margaret said: “I really liked the idea of what the college was about and all the good work they were doing with the children. I love horses but have never ridden one except as a child.

“Before Colonel I sponsored a horse called Bertie. I used to visit the college quite often to see the horses work.

“It was delightful to see Colonel and Elvis making the trip to Avon Reach. I continue to support Colonel with sponsorship and it was such a joy to welcome both horses for an afternoon with us.”

The visit came about after college representatives offered to bring the horses to see Margaret and fellow residents in line with the relaxing of Covid restrictions on care home visits.

“Both Colonel and Elvis were very gentle and the smell and feel of them contributed to a really pleasurable experience all round.

“Many of our residents have spent time with horses in the past and it was fantastic to witness the precious moments when they could renew hands-on contact with a pat and a stroke.”

For resident Jean Davies, the experience broke new ground. “I had never stroked a horse before and I was thrilled,” said Jean. “It was the highlight of my year.”

Jane said: “This was a lovely trip and we were so happy to see the residents come outside and greet the horses.

“We’re grateful to Margaret for her continued sponsorship of Colonel. We rely on such support to help towards the costs of essentials such as feed, hay, shoes and teeth checks.”

Both the college and Avon Reach hope to arrange a return visit later this year.

Colonel is a 25-year-old piebald (black and white) cob while Elvis is a New Forest grey pony, aged 20.