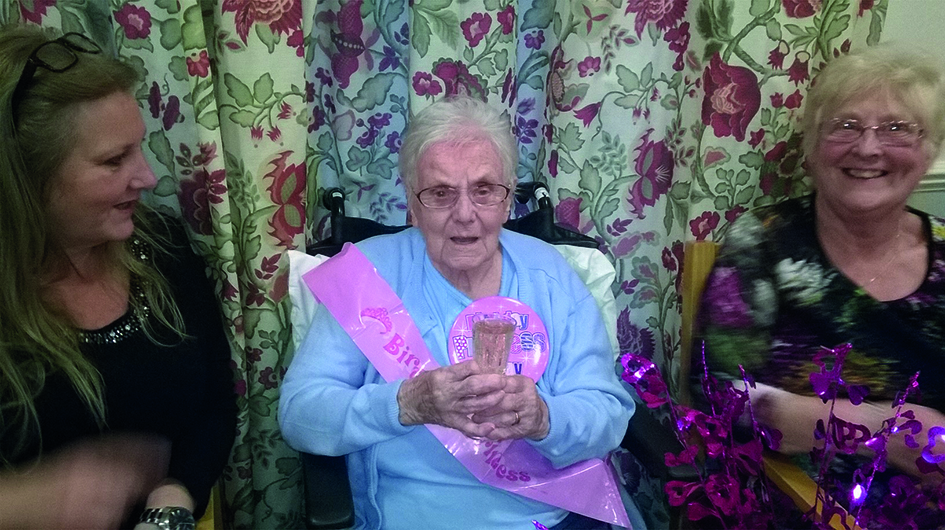 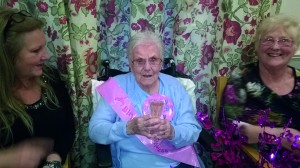 A care home resident from Glasgow has revealed her top tips for maintaining a long and healthy life – one that has seen her reach her 105th birthday.

Ina Carruthers, who celebrated her birthday at Bupa’s Ailsa Craig Care Home, says she attributes her good health to a diet consisting of wheat-bran cereal, toast, biscuits – and most surprisingly, the more than occasional glass of gin with orange juice.

Born in 1910 in Glasgow, the ground-breaking great-grandmother of five worked in a factory during World War Two as a machinist and later as an engineer – before raising three children.

Ina married husband William, at the London Road Church in Bridgeton with the reception held at a nearby tea room.

The service was carried out by Reverend Jackson who also christened Ina’s three children Sarah who sadly passed away at age 8 from appendicitis; Ian who is 70; and Maureen, 65.

Ina explained how her wartime job also saw her challenge the male-female wage divide at the time, receiving a pay which was almost three times as much as the average worker.

She said: “I got very lucky with the job I had during the war – I started off as a machinist then worked my way up to become an engineer.

“Most workers would be paid £3 per week but my salary was almost £9, which meant I could treat myself more often.

“One time, I even splashed out and bought a brand new fur coat.”

Ina also highlights her secrets for longevity, saying: “It definitely takes hard-work to a live a long life and you most certainly have to put the effort in.

“I certainly worked hard during the war – and while I raised my children.

“I also think it’s important to treat yourself with the things that you enjoy – and in my case, gin with orange juice is one of my favourite indulgences.

“I used to go dancing every Monday at a local club in Cessnock – and I would be sure to order it from the bar.”

She added: “Ina always has fantastic stories to tell and is such a pleasure to be around, she’s popular with everyone who lives and works here.

“Residents and staff had a fantastic time helping Ina to celebrate with drinks, refreshments and party food – alongside traditional Scottish cuisine for St. Andrew’s day.

“Turning 105 is such an incredible accomplishment and we’re all so proud of Ina.”