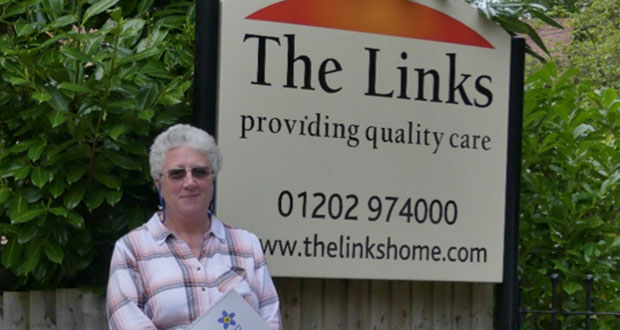 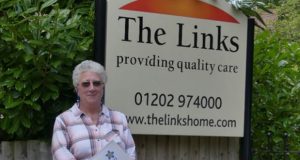 ‘Dementia Champion’ Stephenie Stockley, returned to the care home where her father spent the last years of his life to support relatives and friends and improve their awareness of the disease.

Alan Juniper, 97, passed away in February 2016. He was referred to The Links care home in Broadstone following several hospital visits as he needed further care and support following a diagnosis of Alzheimer’s and vascular dementia.

His condition improved quickly after being referred to the home and he settled in well and gained weight.

Stephenie commented: “It was a big change for us to have dad move into a care home, but we wanted to make sure he was in a safe environment and he got the care and support he needed. The Links accommodated all of our needs and we were able to visit as much as we liked and at the time that suited us and my dad.

“Before we knew it, The Links quickly became a home from home for us and the staff were very supportive and we developed strong friendships with the team.”

Following his move, Stephenie wanted to find out more about the debilitating effect the disease would have on her father. She joined the Dementia Friends group which is an Alzheimers Society initiative to find ways of better communicating with her father which wouldn’t negatively affect his behaviour. She then became a ‘Dementia Champion’ which meant she could hold awareness sessions for friends and relatives of people living with dementia.

She added: “It means a lot to me to become a Dementia Champion as I have been in the shoes of many of the people I train and to come back to The Links and see people that have looked after my father is great.”

“The team at The Links were a life line and I remember my mother and I being sat down with my father for Christmas day breakfast which meant so much to us all before he passed away a few months later.”

The Dementia Friends Awareness Session for relatives and friends. Wednesday 18th May in The Wellness Village, 6pm run by Dementia Friends, an Alzheimers Society initiative.