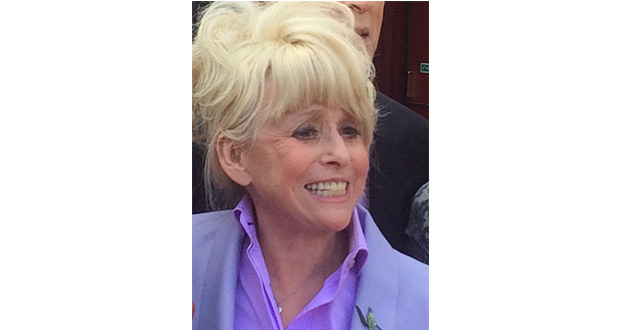 Dame Barbara Windsor and her husband Scott Mitchell present an open letter signed by more than 100,000 to No.10 calling on the Prime Minister to fix the crisis in social care.

Alzheimer’s Society’s open letter to the Prime Minister Boris Johnson, signed by more than 100,000 people, will be presented today at 12.30pm to No.10 Downing Street by Dame Barbara Windsor and Scott Mitchell, along with Alzheimer’s Society’s Chief Executive Jeremy Hughes, Director of Policy Sally Copley, and carers Nimisha Sharma and Namrata Shukla. The letter calls on the Prime Minister to sort out the devastating state of dementia care through immediate investment in an NHS Dementia Fund in Wednesday’s Spending Review while addressing long term reform for the social care system as a priority

Dame Barbara has recorded a special thank you video to everyone who has supported the campaign and signed the open letter. Diagnosed with dementia in 2014, Dame Barbara and her husband Scott are Alzheimer’s Society Ambassadors, supporting the fight against dementia.

Dementia is the biggest health and care challenge facing us today, yet the care system is broken, completely ill-equipped to support the hundreds of thousands of people who need it. For people with dementia, getting access to care is often difficult and in some areas impossible, and care that is available is of hugely variable quality and unaffordable for far too many. People with dementia and their families typically spend at least £100,000 and their care is 15% more expensive than standard social care – just because they were unlucky enough to have developed dementia and not some other disease

The NHS is haemorrhaging millions, an avoidable £570 million each year due to inadequate care in the community. This leaves people with dementia vulnerable, ending up in hospital with avoidable infections, or stuck on wards unable to return home due to the lack of support at home.

Scott Mitchell has been meeting those affected by dementia to get insight into the difficulties that thousands across the UK face every day. Dame Barbara and Scott Mitchell are presenting the letter to the Prime Minister to ensure that he keeps his promise he made on his first day as Prime Minister on 24th July outside Number 10 to ‘fix the crisis in social care, once and for all’.

‘Thank you all so much for your support in signing the letter to our new Prime Minister. It means so much to me. Let’s make this happen, and fix dementia care’.

‘My wife Barbara and I are so proud to be delivering this letter today from the Alzheimer’s Society and all the tens of thousands of people who have signed it.’

‘This overwhelming response from the people across the country really shows the public outrage at the distress caused by our broken social care system. I have learnt so much about the struggles that so many people with dementia and their families face every day, just to get access to the care they need, and it simply cannot go on any longer.’

‘This is a huge opportunity for our Prime Minister and his Government to answer the pleas of the 850,000 people living with dementia across the UK and the millions who are their families, friends and carers. We’re thrilled to see that the Prime Minister and his Government are committed to this. Please don’t let people with dementia down. I cannot stress how desperately we need to see immediate action to fix dementia care. We need an NHS Dementia Fund in the Spending Review on Wednesday. Please join Barbara and I in supporting Alzheimer’s Society’s Fix Dementia Care campaign at alzheimers.org.uk/fixdementiacare.’

‘Barbara and Scott will stop at nothing to help us achieve our goals. We are hugely grateful that on top of navigating their own deeply personal experience of dementia, they are also helping to give the hundreds of thousands of people with dementia and their families a voice which can help us make real change.

‘The system is completely unprepared to support the growing numbers of people receiving a dementia diagnosis. How much more evidence is needed?’

‘Charities, businesses, the NHS and social care leaders themselves are united in exposing the alarming state of social care and the urgency needed to address it. We must end the dementia tax – we need an NHS Dementia Fund to address the most immediate needs while we must urgently see a long-term solution for social care being made a priority.’

As part of the Fix Dementia Care campaign, Alzheimer’s Society is calling for a long-term funding solution combined with immediate investment in a £2.4bn NHS Dementia Fund, established in the upcoming Spending Review. Alzheimer’s Society believes that if the NHS can demonstrate they don’t have sufficient funds, then the Government must provide additional resources.