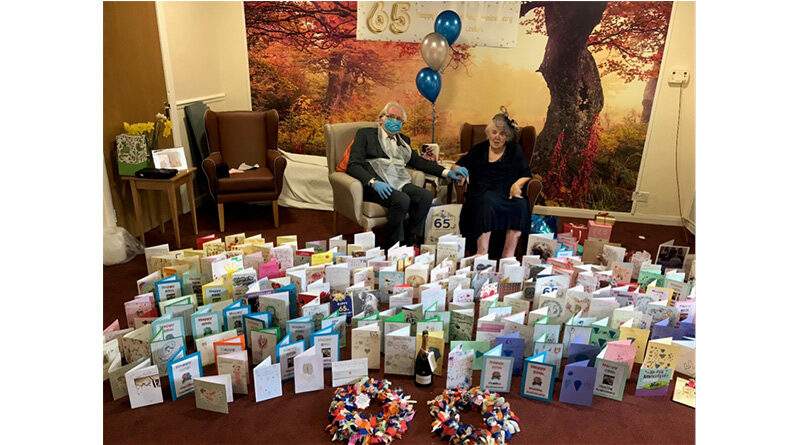 Following a callout to the public to send cards, the staff at Astune Rise Care Home in Eston have helped a much-loved couple celebrate their 65th wedding anniversary after being separated by Covid-19 restrictions for so long.

Evelyn Robinson (aged 83) who is a resident of the home and her husband Colin (aged 89) received over 100 cards from local people and some from across the world, including one from the Queen.

The happy couple were looking forward to being reunited to celebrate their anniversary now that care home residents are allowed visits with one person, but were surprised with Champagne, a three-course meal and the cards and gifts sent in for them. Pupils from nearby Whale Hill Primary School also gifted hand-made ribboned wreaths to decorate both Evelyn and Colin’s doors.

This was the first time the couple have held hands since Evelyn moved into the home last summer. They both dressed up for the occasion and Colin prepared a mixtape of the couple’s favourite songs which they listened to during their meal, before he serenaded Evelyn with a rendition of ‘Can’t Help Falling in Love’.

Caroline Bowstead, manager at Astune Rise Care Home, said: “These kinds of occasions don’t happen very often, so I’m over the moon we were able to give Evelyn and Colin this special day despite everything that is going on in the world at the moment. Even for a short period of time, all the difficulties and heartbreak of the past year seemed to disappear from all of our minds by seeing how happy they both were to be reunited and celebrated.

“We put a lot of effort in behind the scenes to make sure everything was Covid-secure for everyone’s safety. Keeping our plans a secret was hard work too! Our staff were exceptional and went above and beyond to make Evelyn and Colin feel like royalty for the day. I’ve never seen a couple so dedicated to one another, and it’s been really difficult for them to be apart, so they thoroughly deserved it.”

Diane Hoy, the couple’s daughter, added: “The anniversary celebrations were such a brilliant and emotional day for my mam and dad and even us at home seeing photos of them together again looking so happy. They both knew they were going to see each other but had no idea what the home had planned or how many lovely cards and gifts they’d been sent. They’re both still on cloud nine!

“I’d like to thank everyone from the bottom of my heart who spent time and money sending cards and gifts. It’s pure kindness and means even more especially during these trying times we’re in. We’ll all be talking about this for a long time!”

Councillor Mary Ovens, Cabinet Member for Adult Social Care, who took a card and a gift for the couple on behalf of Redcar and Cleveland Borough Council, added: “This is so lovely and I would personally like to congratulate Evelyn and Colin and their family on their anniversary. It is wonderful to see this amazing reaction to their story which has lightened the hearts of so many of us during the lockdown. I’d also like to pay tribute to all the staff at Astune Rise who have clearly done so much along with this family to make this occasion so special.”