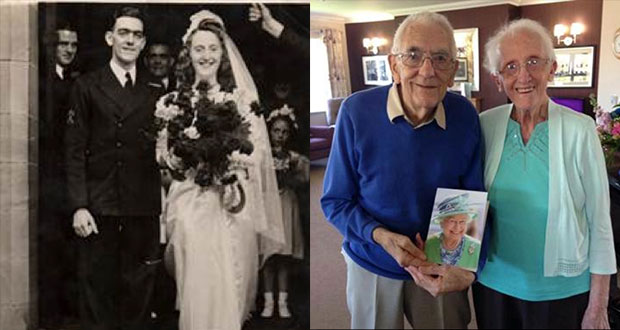 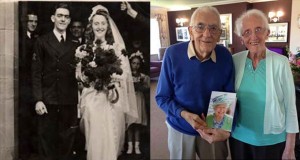 A couple who live at Ash Tree House care home in Hindley celebrated their 70th wedding anniversary with their family this week.  Les and Hilda Racle were married on 20th April 1946 at Saint Clements Church in Urmston when Les was on leave from the Royal Navy.    They have lived together at Ash Tree House since February this year and have made some great friends who also joined in the celebrations.

Les and Hilda, who are now aged 92 and 90, have a daughter and a son, plus five grandchildren and 13 great grandchildren.  Their daughter, Jean, emigrated to New Zealand 30 years ago but she and her husband have made the trip back to England to be with Les and Hilda on their special day.

Ash Tree House staff and residents decorated the home and prepared a buffet and cake for everyone to celebrate.  The couple even received an anniversary card from the Queen!  Kathryn Disley, Home Manager of Ash Tree House, said “We were all so excited to celebrate such a wonderful occasion with Les and Hilda and their family.  They are a perfect couple and still very much in love.  They are inseparable and always smiling and laughing!”

Les and Hilda married when they were aged 22 and 20, and honeymooned in Blackpool before Les had to return to his naval ship.  They bought their first house for £750 – a semi-detached property which had been rebuilt after it was demolished during an air raid.  Les purchased their wedding rings in Australia and he had to look after them whilst he served in the Pacific!  The couple are excited to be celebrating their platinum wedding anniversary and believe the secret to a long and happy marriage is to be best friends.  Les said “We are so happy, we are still the best of friends, even after 70 years of marriage.  Live, love and be happy, and you can’t go wrong!”

Ash Tree House, which is operated by Ideal Carehomes and has 60 en-suite bedrooms, is a high quality residential and dementia care home which provides a great place to live, making a real difference to the lives of the people who live there.