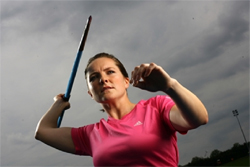 Javelin superstar and Commonwealth Games medal hopeful Goldie Sayers will draw Alzheimer’s Research UK’s Annual Raffle in host city Glasgow next month. The popular athlete will pick the winners just two days after going for gold in front of 52,000 people in the women’s javelin final at Hampden Park, Scotland’s national stadium. The raffle will be drawn on Friday 1 August at the Glasgow office of specialist recruitment firm PageGroup, which has a national partnership with the charity.

Alzheimer’s Research UK’s Annual Raffle is a crucial fundraising tool for the UK’s leading dementia research charity. Since its launch in 2004 it has generated almost £410,000 – enough to fund major research projects, cutting edge equipment for scientists and thousands of hours of pioneering research. With an estimated 70,000 tickets sold this year, Goldie will face a mountain of entries from which to pluck lucky winners.

The top prize this year is £1,000 cash, while the runner-up will win a stay for two at the five-star South Lodge Hotel in West Sussex. Other top prizes include tea for two at the Ritz, shark feeding for a family of five at Sea Life in Great Yarmouth and two all-day vouchers for Hoar Cross Hall Spa Hotel in Staffordshire.

Since breaking the British junior record in 2001, Goldie has gone on to become one of Britain’s leading field event athletes. She has competed in the last three Olympics, with her best performance a fourth-placed finish at Beijing 2008. A month before the London Olympics, Goldie smashed her own British record with a throw of 66.17m at a Diamond League meeting, but tore elbow ligaments in the process. A repeat of her record throw would have been enough to win silver at the 2012 Games, but the injury ruined her medal chances and she failed to qualify for the final.

But after multiple surgeries on her throwing arm Goldie has now returned to winning ways, and last month claimed her 11th national title in Birmingham.

“I’m very proud to support Alzheimer’s Research UK. Alzheimer’s disease and other dementias are likely to affect us all in some way during our lives, so it’s incredibly important to invest in research to combat the illness. Evidence suggests exercise can help reduce the risk of developing dementia as part of a healthy lifestyle, so I hope everyone will be inspired by the sport they see during the Commonwealth Games to get active.

“Having endured three elbow operations and 18 months of rehab since London 2012, I’m very proud to be competing for my country again at my third Commonwealth Games in Glasgow. The women’s javelin is likely to be one of the most competitive athletics events, so my competition will be very strong. But I’m aiming to produce a great performance and would love to win a medal for Team England.”

This year’s draw host PageGroup selected Alzheimer’s Research UK as its charity partner in 2013. Staff regularly take on challenges and participate in sporting events to boost funds and raise awareness. Since the two-year partnership was launched last year, PageGroup has raised over £100,000 for vital dementia research.

“We’re so pleased to host this year’s Annual Raffle draw at our Glasgow office for our charity partner, Alzheimer’s Research UK. We understand the importance of supporting such vital fundraising events and raising community awareness throughout the UK, particularly when Glasgow is hosting the Commonwealth Games.

“Our people are committed to bringing hope to thousands of UK families who are profoundly affected by dementia and have regularly participated in sporting challenges and fundraising events to fund two PhD Research Scholarships in the dementia research field. We are thrilled to be supporting such an outstanding fundraising event and look forward to seeing its positive effects in innovative dementia research.”

For more information about Alzheimer’s Research UK or to find out more about fundraising for the charity, call 0300 111 5555 or visit www.alzheimersresearchuk.org