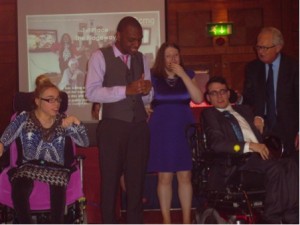 A CMG service for people living with learning disabilities is the first of its kind in England to have been rated Outstanding by the Care Quality Commission (CQC). It is, so far, the only time a supported living service has received the highest commendation, since the regulator changed its system of inspection.

The Ridgeway in Havering, East London was recognised by the CQC for its work in putting its four tenants at the heart of everything they do and empowering them to live independent lives. Wilson Barros, Sophie Cowderoy, Leslie Stoller and Carl Johnson all call The Ridgeway home and have voluntary and paid work.

Wilson Barros, for example, enjoys interacting with other people. He was offered a job at CMG’s regional office answering phone calls and delivering post. Despite having no sight, he has learnt how to use the switchboard and has excelled in his role.

After her and her friends, some of whom use wheelchairs, were often unable to get on buses,  Sophie Cowderoy – another Ridgeway resident – launched a campaign to improve disabled access on public transport. Her efforts took her to the Mayor of London’s Question Time, where she raised the issue with Boris Johnson. Sophie’s work has been recognised by CMG and she now visits other services in the country to help other people with learning disabilities campaign about causes close to their hearts.

Another tenant, Carl Johnson, was named as the Most Inspirational Individual at CMG’s Service User Awards in 2013. Carl lives with Cerebral Palsy, which means he does not walk, sit unaided or talk. This has not stopped him volunteering at his beloved Dagenham and Redbridge Football Club and getting paid employment. He now delivers presentations to other people supported by CMG on how they can make the most out of opportunities in the communities they live in.

CMG has run The Ridgeway for the last four and a half years. Before the leading care provider took it over, it was used as a residential property.

The CQC introduced a new style of inspections on 1st October 2014. The regulator now provides an Ofsted style rating of Oustanding, Good, Requires Improvement or Inadequate.

“Ever since we started four and a half years ago we were absolutely clear about our ethos. We have always wanted our tenants to live independent lives, have choice and control over what they do, understand their rights and be given support to access work, education and social activities.

We are extremely proud of what we have achieved and that the CQC has recognised our hard work. There can be challenges at times, but the people we support love living here and we love working with them.”

“The Outsanding rating is a testament to the staff at the Ridgeway and the wonderful, positive atmosphere they have created there.

“All of the tenants there have achieved so much in the wider communities, particularly with their work. This success is built upon the happy home life they are able to live at The Ridgeway.”