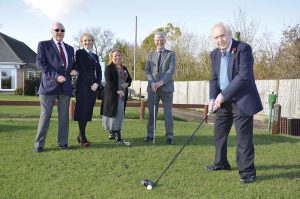 A Dorset care home staged a special day trip so a resident could receive an honorary membership of the beloved golf club he played at for more than half a century.

Graham Lloyd, 88, joined Ashley Wood Golf Club near Blandford in 1966 and became its longest-serving member, only packing away his clubs around 18 months ago.

“It was a great surprise to hear about this and I feel truly honoured,” he said. “This is a very happy club and I have been proud to be a member. I always met very nice people over the years and enjoyed their company. Golf suited me as it’s a competitive game and I’m a very competitive person.”

David, who formally proposed Graham for the honorary membership, said: “There was a unanimous vote in favour. Graham spent more than 50 years with us and that’s a very long time indeed. I felt he deserved recognition and the chance to come back whenever he wants without having to pay any more subscriptions.”

Chit said: “It was lovely to see Graham meet up with his old friends again. He may be in a care home but, as with many of our residents, he’s still active in the community. We always do our best to ensure our residents retain their lifelong interests and community links.”

Friends and former golfing partners at the lunch included Joe Robbins, an ex-President, who joined the 121-year-old club just four months after Graham.

Among their celebrated anecdotes is a tale of Graham claiming an unusual hole in one. Straight from the tee, his ball landed close to the hole and a cat playing and scratching itself on the green actually tapped it in.