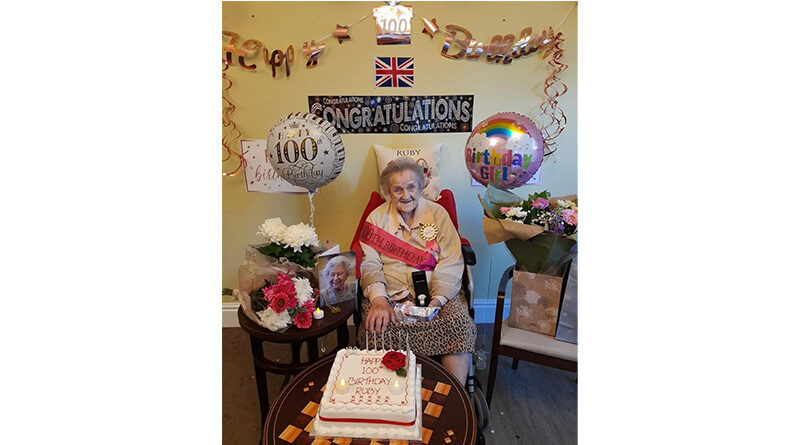 One of the Residents at HC-One’s Clarendon Hall residential and nursing care home, in Humberston, recently turned 100 and everyone wanted to celebrate in the ‘Clarendon way’.

Ruby Wilkinson was born on 21st October 1921 on Torrington Street, in Grimsby. She worked at the fish docks in Grimsby doing typing, shorthand and bookkeeping.

Ruby married her husband Royce on 4th October 1947 in Old Clee, with the reception at the Royal Hotel. The couple were first introduced by Ruby’s friend at a dancing café. Ruby laughs and finds it funny that Royce was her friend’s boyfriend first!

Royce and Ruby had two daughters, Lynda and Diane as well as many grandchildren and extended family.

For her birthday, the lounge at the home was decorated for Ruby when she first came downstairs, and the visiting room was also decorated ready for her family visiting. Ruby was shocked by all the decorations but enjoyed her day.

The home’s chef made Ruby a special cake which she shared with other Residents.

Ruby had a little tea party with her family who were able to visit on the day also and she loved the cake and commented, “I had a lovely day.”

Daughter Lynda thanked all staff for all the efforts made to make her mother’s birthday special.

When asked about what her secret is to a long life, Ruby remarked, “Being sociable, having a good family and enjoying a bit of what you fancy.” She also enjoys music and watching the television soaps.

Nicola Walker, Home Manager, commented, “It was so lovely to be able to celebrate Ruby’s birthday with her and her family.”