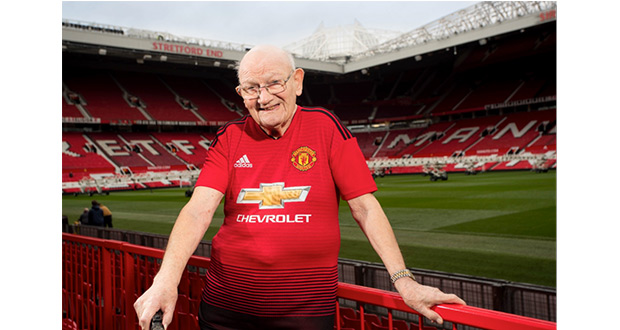 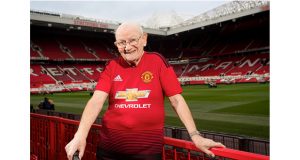 Christmas came early this year for William Jakeman, a resident at New Care’s Ashlands Manor Care Centre in Sale, who was treated to an exclusive behind the scenes tour at Old Trafford.

A life long Red, 98 year old William has visited the Theatre of Dreams many times, watching games in Stretford End and enjoying corporate hospitality in the boxes.  Having not been for about 10 years, William was thrilled when New Care told him about his surprise trip to the stadium.

A resident at Ashlands Manor for just over one year, William says: “I was a little bewildered when I heard, but I guess I am one of Manchester United’s oldest supporters!  I used to love going to Old Trafford to watch the matches, being with the masses, and was over the moon to be back in Stretford End.  That was amazing!

“The whole day was just great; being chauffeur driven and arriving in style to the VIP tour of the stadium and receiving my personalised shirt.

“I have supported Manchester United for such a long time – I even used to go to games in Newton Heath! Although I don’t actually watch the matches on TV anymore, I do keep up with the results on Match of the Day.  Plus, all of my family are Reds so we are constantly chatting on Whats App, commenting on the players’ performances and discussing tactics.”

Having organised the trip to Old Trafford, Dominic Kay, Chairman at New Care, adds: “William has always been and still is a passionate supporter of Manchester United.  Having not been to Old Trafford for a while we wanted to take him there and enjoy this memorable experience alongside him.

“Within each and every New Care facility we actively encourage all of our residents to retain their hobbies and interests and will do whatever we can to make this possible.  We firmly believe that simply because you live in a care home you do not have to stop living your life, nor lose your personality or individuality.  William is a wonderful example of a resident with a real zest for life.

“It was a pleasure for me to see William back in the Stretford End, making his way down the wing after all these years.”