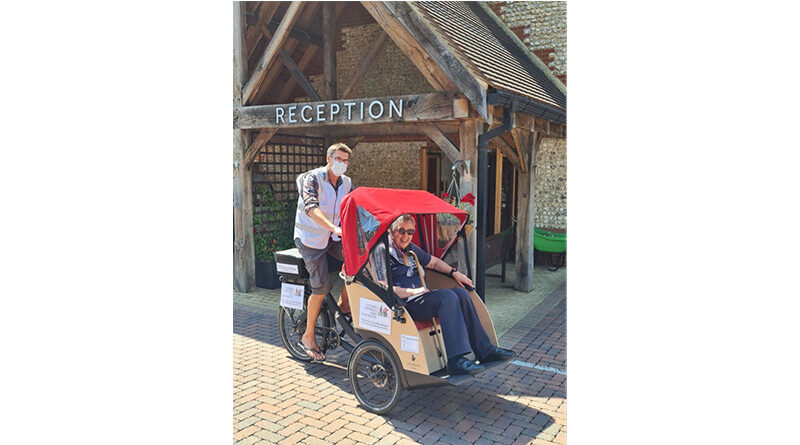 Residents from a Chichester care home were among the first passengers to take a neighbourhood trip aboard a specially adapted community bike.

A party from Colten Care’s Wellington Grange took turns to sit in a ‘trishaw’ powered and steered from behind by a volunteer ‘pilot’.

Their rides follow the summer launch of BrightRide, a not-for-profit community interest company which has brought the city’s first trishaw into service with funding from Chichester City Council.

After touring round the local area in the sunshine and fresh air, Wellington Grange residents said they were thrilled with their mobile change of scene.

First up for a spin was Jean Moss who joked about being the home’s ‘guinea pig’ and commented: “This is the most fun I’ve had in years.”

And after a ride around Oaklands Park, close to the Broyle Road home, Chloe Appleby said: “I had a brilliant time.  It was just like going for a walk, which I can’t do now, so I loved it. It was great to feel the wind in my hair.”

Chloe praised her volunteer pilot Richard Turnbull after she learned he had founded BrightRide in a break from paid work during the pandemic and he explained its aim of helping to bring ‘fresh air and happiness’ into people’s lives.

“I just found the idea really inspiring,” said Chloe. “He chose to spend his time creating something good for others to enjoy rather than do nothing when his work was on hiatus in the first lockdown. He saw the idea through to fruition and I think it’s amazing.”

Richard said: “It’s so lovely to see the pleasure that going out and about on the trishaw brings to people. They get so much happiness from it.”

Sarah-jane Willis, Companionship team member at Wellington Grange, said: “It was a fantastic afternoon and proved a very popular activity. Richard and his trishaw will definitely be back, especially once the word has got round how brilliant it was. We think most of our residents will be queuing up to have a go.”