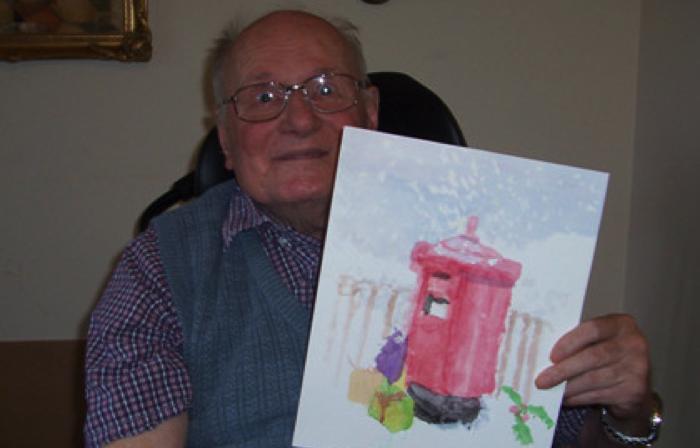 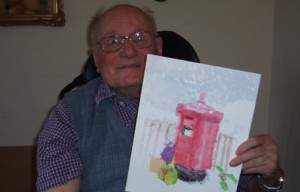 A care home receptionist in Skipton and an 87 year old man from Horsham are the joint winners of a national Christmas card competition run by Barchester Healthcare and their beautiful designs will appear on a charity Christmas card to be received by people throughout the UK.

Both designs were chosen from hundreds of entries sent into Barchester’s Christmas Card Competition by Barchester staff and residents.

The sale of the cards will help raise money for Barchester’s Charitable Foundation, which helps older people and other adults living with a disability in the UK by offering grants to improve independence, mobility and quality of life.

David Bower’s daughters, Jan and Sue,  are delighted that their dad has achieved this after a difficult time in his life. Some of their earliest memories involve seeing him sitting in the front room with his easel. David studied art at Birmingham University but his passion for the subject was interrupted by joining the RAF after which he focussed on becoming a pharmacist and his art was then purely a hobby.

After a series of strokes 4 years ago David was left unable to walk or communicate and had to learn to use his left hand for basic tasks. Now at Westlake House, with regular visits from local artist Ann Harris, David has once again learned to put paint to paper and for the first time in his life not only has he won a competition, one of his creations is now in print.

Liz Higson, General Manager at Westlake House said: “I am thrilled that David’s artwork has been chosen for this year’s Christmas card. He is a real inspiration and we are so proud to have such talented residents at Westlake House.”

Terry Whitham, said: “There is always a needle and fabric near me and I loved the Christmas tree pattern which I enjoyed creating. I only entered the competition at last minute and was so surprised when it was one of the winning designs. I trust all will