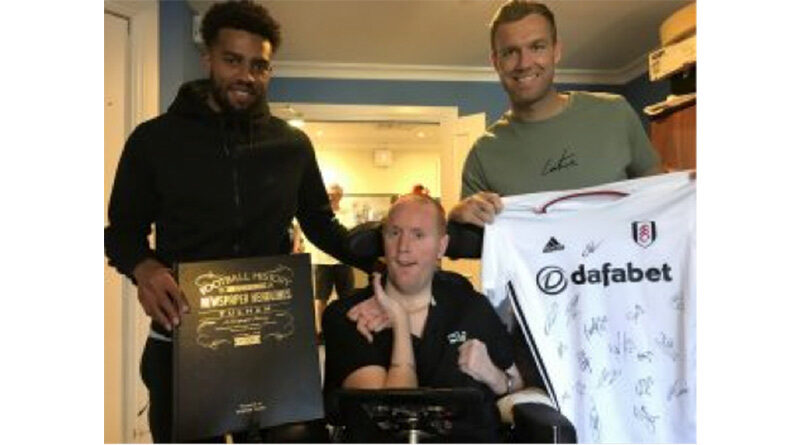 A soldier left brain damaged after a mortar bomb attack in Iraq has completed a 60-mile cycling fundraiser from his room at a Surbiton care home on national TV.

Wheelchair-bound Royal Star & Garter resident Stephen Vause finished his virtual London to Brighton challenge raising money for Help for Heroes on Monday 1 February. He started the ‘Do 60 with Steve’ challenge on Christmas Eve, and the final moments of his efforts were captured on film by staff at the Home and shared by Lorraine Kelly on her ITV breakfast show Lorraine, the following day (2 February).

Stephen had been cycling around three miles a day on a static bike in his room, with the support of Royal Star & Garter staff. The charity provides loving, compassionate care to veterans and their partners living with disability or dementia.

He has been encouraging others to fundraise with him using #do60withSteve, and received support along the way from celebrities including Lorraine Kelly, Lord Sugar, Jeremy Vine and the Loose Women team.

To date Stephen has raised over £4,100, surpassing his £1,500 target. He said: “Help for Heroes is a charity which is very important to me.”

Stephen was just 19 and on his first tour in Iraq, serving with the 4th Battalion The Rifles, when he suffered brain injuries in a mortar explosion near Basra. The attack left him severely disabled.

Now 33, he said: “My injuries from a mortar attack were so severe that my life was in imminent danger. I have spent much time working on my recovery and rehabilitation since then, and will require a high level of support for the rest of my life. Help for Heroes have helped me a great deal and I wanted to do something for them, knowing it would help other veterans, especially at this tough time. Whilst this bike ride is usually a one day event, for me it is a six-week challenge on my adapted static bike using my arms and legs alternately.”

Royal Star & Garter was established in 1916 to care for the severely injured young men returning from the battlegrounds of the First World War. It has a close working relationship with Help for Heroes who also funded a bespoke wheelchair and specialist gym equipment to support Stephen’s care.

Stephen is a popular figure at Royal Star & Garter, and helped to run Boccia sessions for fellow residents. In 2019, the Fulham fanatic was visited by two footballers from the Craven Cottage club, in a meeting arranged by staff at the Home.

He has been living at the Home since 2015, where he receives round-the-clock specialist care. He has one-to-one physiotherapy two to three times a week, and is also helped and enabled by the charity to access a local hydrotherapy service.

In October 2018, his sister Sian led ‘Team Vause’ in a Tough Mudder challenge, raising over £1,000 for Royal Star & Garter. To show his support, the ex-soldier undertook his own set of challenges, including lifting weights, sit-ups and hand-eye coordination tasks.

Royal Star & Garter Chief Executive Andy Cole said: “Stephen is an inspiration to all of us and we feel very privileged that he chooses to live with us at Royal Star & Garter. He and his family have supported and raised money for us, and we’re proud to be supporting him as he fundraises for another excellent military charity.”