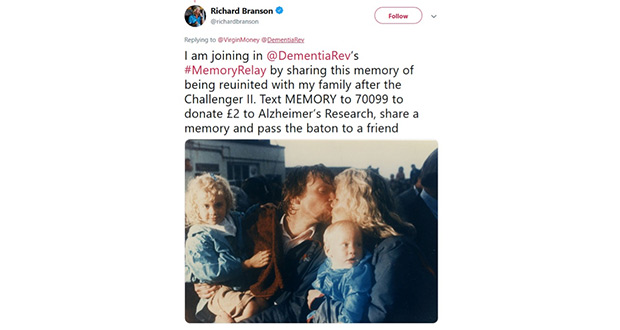 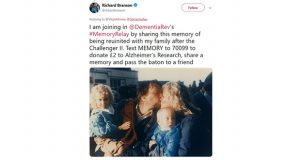 Celebrities including Richard Branson, Rachel Riley and Candice Brown have been sharing some of their most cherished memories on Twitter to help power research towards a cure for dementia.

Their posts have been in aid of a #MemoryRelay for the Dementia Revolution – a one-year campaign that has seen Alzheimer’s Society and Alzheimer’s Research UK join forces as the charity partner for Virgin Money and the 2019 Virgin Money London Marathon. The aim is to raise £3.5million to help fund groundbreaking dementia research at the UK Dementia Research Institute.

For the #MemoryRelay, people are being nominated online to share one of their special memories and make a £2 donation to the Dementia Revolution by texting MEMORY to 70099.

Sir Richard shared a heart-warming picture of the moment he was reunited with his family after the Challenger II. Countdown star Rachel shared a cute childhood image of her sitting in a fridge with her brother, then nominated her Strictly Come Dancing star boyfriend, Pasha Kovalev, to join the #MemoryRelay.

Great British Bake Off winner, Candice, posted a more recent image of when she met Dame Barbara Windsor, who is backing the Dementia Revolution following her Alzheimer’s diagnosis, announced earlier this year.

“We’re delighted that so many people have already got involved with the Dementia Revolution’s #MemoryRelay and it’s been great to see so many wonderful memories. Today, almost one million are living with dementia in the UK, and memories are often the first things that are taken from people living with the condition. By encouraging people to share their memories and donate to the Dementia Revolution, we are giving ourselves the best chance of saving those memories from the devastation of dementia.”

“Thank you to everyone you has taken part so far. The more people who get involved, the more money we will be able to raise for groundbreaking dementia research, to help defeat a condition that affects so many people. Please do share your memory for the #MemoryRelay and join the Dementia Revolution. We can’t wait to see them!”

To take part in the #MemoryRelay, share one of your most treasured memories on your social media channels, using this suggested post:

The memory I’m sharing for @DementiaRev’s #MemoryRelay is [insert memory]. I’ve textedMEMORY to 70099 for a £2 donation to the #dementiarevolution. I’m passing the baton on to [@friend] to do the same to help lead the charge towards a cure for dementia.