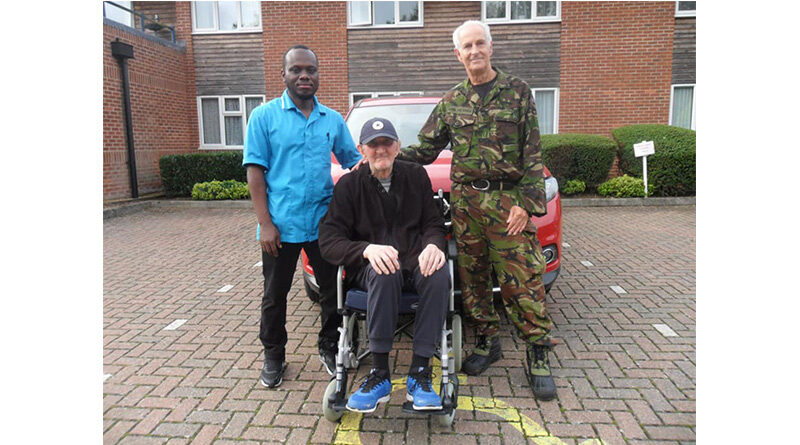 At The Heights, one of the care homes within The Fremantle Trust, Housekeeper Paul Bond and Care Worker Bernard Quarshie went above and beyond to help resident Roderick Smith fulfil his dream to once again go fishing.

Between them they’ve racked up many years of fishing practice and spent endless hours comparing their experiences as keen fisherman. Paul said: “Rod had a similar route into fishing as I did, as they say, once a fisherman always a fisherman. It became apparent that he would love to go fishing again so I decided to arrange for this to happen.”

With the involvement of his daughter Tracey, the arrangements were made to get Rod’s fishing tackle out of storage, obtain a fishing licence, purchase Rod’s preferred bait and find a suitable, local lake near Milton Keynes.

Paul added: “We chose the smaller lake at Milton Pools Fishery, which had Carp up to 26 lbs. We booked two swims to give us lots of room.”

Keen to head out for their fishing trip, Paul, Bernard and Rod got together early on a Wednesday morning and set off with their boot full of fishing gear.

After a day of catching a few fish between them, Paul commented: “I could see that Rod had a great time. He loved being back by the water with his fishing rod in hand. He was very grateful to both Bernard and I and thank us both profusely. It gave me a lump in my throat to know that we’d helped fulfil his dream to fish again.”

Rod’s daughter Tracey noticed a marked change in her father after the trip: “He was much brighter and his talking had improved. I’m looking forward to him going again and can’t thank Paul and Bernard enough.”

Tracey added: “Dad is already planning his next fishing trip and is hoping to catch a monster carp at Plimco Farm where he used to fish many years ago.”