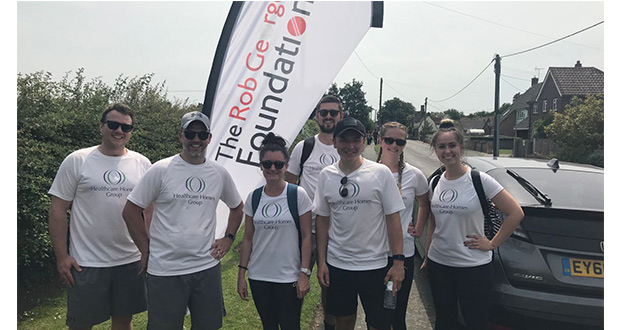 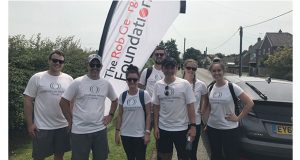 A team from the Healthcare Homes Group has taken part in a long distance walk to support a charity set-up in memory of the son of a colleague, who sadly died following a battle with Leukaemia.

The team, consisting of Harriette Duncan, Hannah Bunce, Danni Cowie, Lauren Smith, Cara Mariotti, Laura Wright, Richard Wilson, Ben Hewitt, Ed Pink and Matt King, took part in the official walk along the Essex Way Route, between Epping and Harwich, which was held on the 22nd and 23rd June. The majority of the team joined day two of the event, officially covering 36.1 miles between Great Tey and Harwich.

The walk was held to raise funds for the Rob George Foundation, set up by the Healthcare Homes Group’s Chairman, Philip George with his wife Lorraine. The Foundation was set up in memory of their son Rob, who died in 2013 aged just 21, following a long battle with Leukaemia.

Rob fully supported the idea that a Foundation be set up in his memory to support young people who faced financial difficulties similar to those he had encountered. It provides practical and financial support to young people with life threatening or terminal illnesses, and to young people who demonstrate exceptional commitment or ability in the worlds of sport or the performing arts, but may face financial challenge.

The group of walkers from Healthcare Homes, which is based in Ardleigh near Colchester, completed their journey with much pride, and were supported along the way by team members who joined them for different sections.

Group Finance Director Matt King confirms, “I’m so pleased and proud that we managed to complete the full distance we had set ourselves. I have to say that when we decided to do this, the enormity of the challenge was definitely underestimated and it really hit home over the last sections of the walk. In total we covered around 200 miles on foot between us all.

“With a lot of support and a lot of determination, we did it, and we hope we have played a small part in helping Rob’s Foundation to support other young people. The Foundation’s aim is to ‘Make a difference…..one individual at a time’, and if we’ve helped them make a difference to just one person, then we are thrilled.”

Further information on the Rob George Foundation can be found at www.therobgeorgefoundation.co.uk.