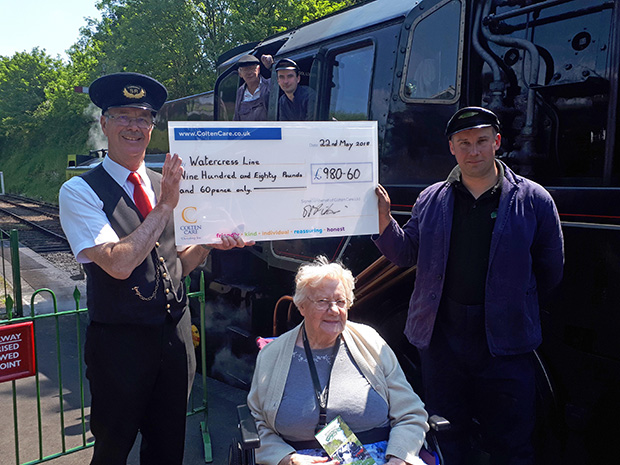 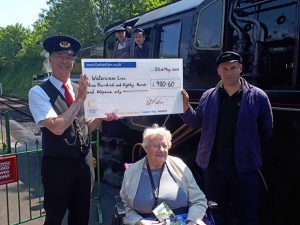 Train enthusiasts at a Hampshire care home are so thrilled with their nearby heritage railway they’ve raised nearly £1,000 to help preserve it for future generations.

The appreciative senior passengers of the Mid Hants Railway, known affectionately as the Watercress Line, live seven miles away at Abbotts Barton nursing and residential home in Winchester.

As with all 20 homes run by family-owned Colten Care, Abbotts Barton enables its residents to nominate charities and worthy causes to support every year.

When they chose the line as their preferred charity in 2017, it meant collections could be taken at community events in the home including a harvest lunch, barbecue, coffee mornings and Valentine’s raffle. In arts and crafts sessions, residents even made decorations to sell at a Christmas fair.

Janet Orchard of the home’s Companionship Team said: “Our residents are regular visitors to the Watercress Line. They wanted to do their bit to help keep it going and know that their grandchildren and great-grandchildren can enjoy it in future years.”

On their latest trip, a party from Abbotts Barton presented railway volunteers including a platform guard, driver and stoker with a giant cheque representing the £980.60 raised through the home’s campaign.

“We adore coming here,” said resident Joyce Malphus. “Even though we live in an absolutely beautiful home, we all appreciate going out in the minibus for sunny day trips and having this fabulous railway line nearby is ideal. We’d love to know it can be preserved for younger generations in years to come.”

After the cheque presentation at Alresford station, the visitors boarded a steam train for their return trip to Alton, ten miles down the line. Back later at Alresford, the day ended with a picnic at the nearby Avington Park stately home.

The Watercress Line has operated as a preserved heritage railway for more than 40 years. It is a registered charity run by volunteers and a core team of paid staff.

Its name reflects its original role of linking to the wider railway network to transport Hampshire-grown watercress to London markets including Covent Garden in the late 19th and early 20th centuries.

Colin Chambers, Watercress Line Managing Director, said: “It’s fantastic to think that the residents at Abbotts Barton have taken us to heart and share in our goal of preserving, maintaining and operating this amazing railway now and in the future. We are very grateful to them for their fundraising efforts.”

Abbotts Barton’s nominated charity for this year is Emmaus Hampshire, part of a social enterprise community that helps homeless people in the UK and France.