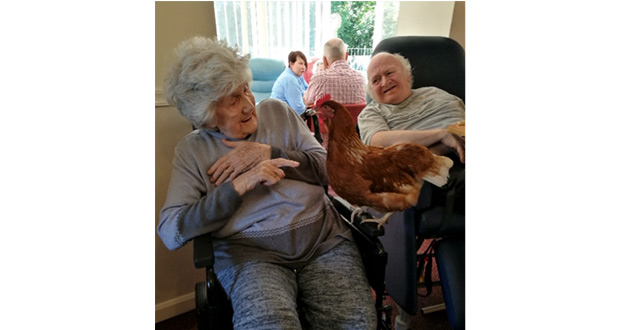 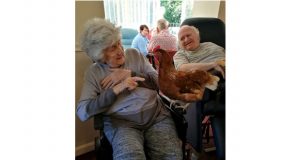 THE CHICKEN whisperer is the nickname given to a Teesside care home resident due to her uncanny ability to calm an intake of feathered friends.

Upon arrival, 93-year-old Irene Fleming built an immediate rapport with the birds, having years of experience looking after hens from her time in the Women’s Land Army during the Second World War.

After chatting to the creatures and calming them when they got flustered, Equal Arts associate Raël Rawlinson dubbed Irene “the chicken whisperer”.

Irene said: “I love having hens here at Mandale. They’re such good girls. They remind me of my flock when I was a land girl.”

Irene joined the Women’s Land Army shortly after the outbreak of the War and was based at Shincliff Hall, near Durham.

She recalled: “I did all of the usual farm duties – planting, harvesting and mucking out – but my favourite thing was to work with the hens.

“The hens thought I was their mum as they would come when I called them. I would sing to them while I worked and they liked the sound of my voice.

“I named one Veronica after my friend. At first Veronica wasn’t very happy at sharing her name with a chicken but after a while she came round.

“The other Land Army girls said I was barmy because I loved the chickens so much.”

The project was officially launched at the home by Thornaby Mayor Cllr Steve Walmsley and Mayoress Cllr Sylvia Walmsley.

Mayor Walmsley said: “The latest invite received from Mandale House to Sylvia and I in our capacity as Mayor and Mayoress of Thornaby was unusual to say the least.

“The wonderful staff at Mandale House had recently embarked on a project to introduce three new egg laying residents to the home and decided to make it a special event. And so with great fanfare – or maybe henfare – I introduced three hens into the home via a red carpet laden with food to entice the new residents.

“Congratulations to Mandale House for such an innovative idea to introduce three adorable creatures into the home to stimulate and fascinate residents as well as producing freshly laid eggs.”

Louise Clements, home manager at Mandale House Care Home, said: “I would like to say a massive thank you to Equal Arts and their HenPower Project as well as Mayor and Mayoress Walmsley for attending the launch event.

“The hens have settled in really well and are already a hit with our residents, especially our very own chicken whisperer Irene Fleming.

“Everyone is thoroughly enjoying the weekly creative sessions and we look forward to working with the charity going forward.”