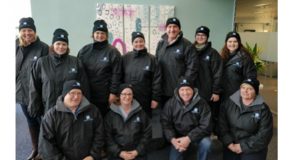 Employees from care homes around the north east of Scotland will be bunking down in sleeping bags for the night to highlight the plight of Scotland’s homeless.

Twenty care home workers from Balhousie Care Group will join 9000 people – including celebrities, politicians and other business leaders – on the night of December 9th in Edinburgh’s Princes Street Gardens for Sleep in the Park 2017.

They will be joined by Balhousie head office staff, including chairman Tony Banks and CEO Steve White, for the “world’s largest sleepout”. The event includes a music and comedy line-up and takes place in freezing temperatures to raise money for Social Bite, which addresses the homeless through its cafes, restaurants and free food distribution in Scotland. Among those taking part in the event are Bob Geldof, John Cleese, Liam Gallagher, Deacon Blue and Amy Macdonald.

The staff will face freezing temperatures as they look to highlight social issues as part of Balhousie’s philosophy of inclusion.

Savanna Henvey, a care assistant at Balhousie Stormont Lodge Care Home in Blairgowrie and one of the Sleep in the Park participants, said:

“I volunteered for Sleep in the Park because I felt that homeless people don’t get a lot of recognition. Most people will just walk past the homeless in the street and judge them before knowing their story. Sleep in the Park is going to make a big difference to a lot of people this Christmas. I’m happy to be a part of it, although it will be hard sleeping in Princes Street Gardens in such cold temperatures.”

Balhousie CEO Steve White said: “An estimated 28,000 people in Scotland are homeless, so sleeping rough for just one night seems like the least we can do to raise awareness of this very pressing social problem. With 25 care homes, 25 years of business under our belt, and a presence in many local communities, we want to use our position to highlight social causes like this which urgently need addressing. With the homelessness problem set to increase in Scotland, it’s time to stand – or in this case lie down – and say ‘No more’.”

To support Balhousie’s Sleep In the Park imitative go to: http://uk.virginmoneygiving.com/team/balhousie-care-group