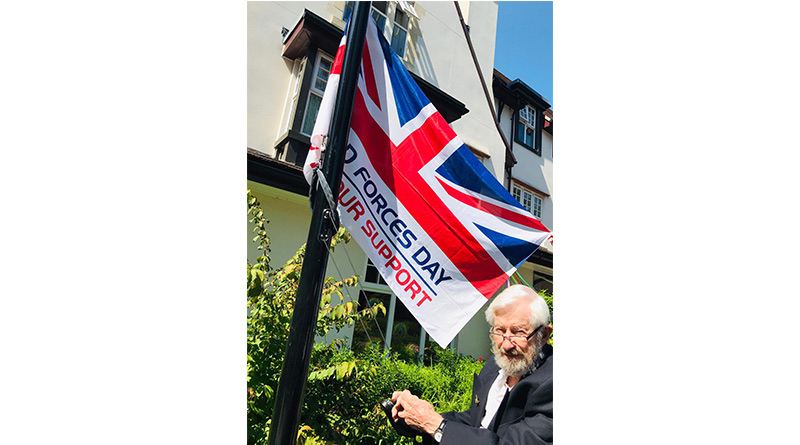 Veterans in each of the charity’s Homes in Solihull, Surbiton and High Wycombe took part in the event, which was the culmination of Armed Forces Week (22-27 June). Some helped raise special Armed Forces Day flags, while others paid tribute by taking part in a salute for all those who have served in the military.

At the Surbiton Home, Army veteran Peter, who served in the Royal Engineers, raised the flag. Kingston Mayor Margaret Thompson also joined celebrations with a Zoom video call to the Home. She spoke to World War II WAAF veteran Flo, members of staff, and a volunteer who joined in the call from her home.

In Solihull, residents enjoyed a garden concert from vintage vocal harmony group Boogaloo Babes. They participated in the salute and tucked into cupcakes, ice cream and champagne, while observing social distancing. In High Wycombe 101-year-old Ena, whose husband died in action in 1944, raised the Armed Forces Day flag.

Royal Star & Garter is a charity which provides loving, compassionate care to veterans and their partners living with disability or dementia.

Cllr Thompson, the Mayor of Kingston, said: “It was a real pleasure to attend a remote meeting at Royal Star & Garter. The commitment of the staff, who have continued to care for residents with great compassion during the pandemic, and of the volunteers who have maintained phone and social media contact with residents, was truly awe-inspiring.

“I also had the pleasure of meeting Flo, who at 98 was au fait with Zoom and who told me fascinating stories of her wartime experiences as a lorry driver in the RAF. Voices like hers must not be lost.

“I am looking forward to being able to visit in person again.”

Andy Cole, the charity’s Chief Executive, said: “Armed Forces Week is an important time for us and our residents. It is an opportunity to give thanks for the sacrifices our servicemen and women have made, and continue to make, for our country. We were especially delighted that the Mayor of Kingston was able to spend time talking to our World War II veterans, staff and volunteers at our Surbiton Home.”

A Royal Star & Garter resident added: “During this difficult time, it’s really nice that we can still come together to pay tribute to the British Armed Forces.”