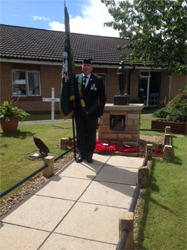 A Bupa care home in Lanarkshire has been able to pay a poignant tribute to the anniversary of the start of World War One – with the construction of a unique war memorial statue in its grounds.

The memorial was erected in Bupa’s Hatton Lea Care Home, in Bellshill, after a former resident who had been a George Medal ex-serviceman, was unable to attend the town’s annual war memorial parade due to ill health.

The statue – created and designed in Wales – was built after £4000 was raised by staff, residents and local community members in a fundraising campaign lead by John Grant, a House Manager at Hatton Lea Care Home.

The bronze statue of a Scottish soldier now allows residents to commemorate various war memorial events without having to travel far from the Bupa care home.

And last week, many of the home’s residents joined locals, politicians, former soldiers and community council members for a WW1 commemorative parade that travelled from the Bellshill War Memorial to the new memorial at Bupa’s Hatton Lea Care Home.

The care home stages a service each year to mark the anniversary, however this year they decided to commemorate the centenary with a parade which included local MSP Michael McMahon, MSP Richard Lyle, Councillor Harry McGuigan , Lord Lieutenant John Brown and members of the Cameronian Regiment.

Staff in the home organised an anniversary reception after the parade with Glasgow band Carbon Copy entertaining guests with songs inspired from the war-time.

June Sugden, Care Home Manager at Bupa’s Hatton Lea Care Home, was delighted with the turnout for the parade.

She said: “It was a fantastic day and the turnout was stellar – both from the home and the local community.

“We are delighted that our memorial has played such an important part in the town’s commemoration of the anniversary of the start of WW1.

“The memorial has become a strong focal point in the home – and no more so during the WW1 commemoration events.

“We also had ex soldiers from our other Care Homes in the area, Golfhill, Haydale, Highgate, Kirknowe, Quayside and Craigbank, who joined us for the event which was particularly pleasing as we know our residents were very keen to pay their respects.”