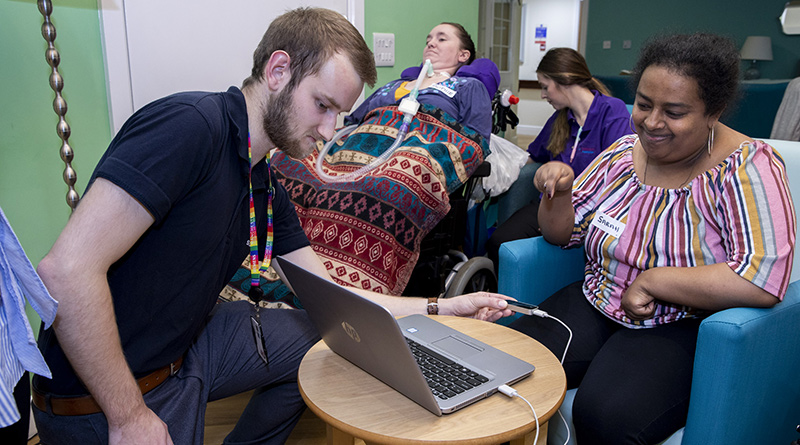 The device has been trialled at the Pendine Park care organisation who are working with Europe’s largest industrial manufacturing company, Siemens, and the Hallé orchestra.

The first version of the device was a wrist band which was tested by the residents two years ago.

The prototype has now been refined and the motion sensitive device, no bigger than a bar of chocolate, is connected by a single wire lead to a PC or laptop.

It can then be placed on a resident’s lap or on a table in front of them so they can also play a tune.

By moving their hand or fingers above the device, residents can produce musical sounds identical to whichever musical instrument the device is programmed to sound like.

Siemens is Diamond Partner of the Manchester-based Hallé which for more than a decade has had a close working relationship with Pendine Park and is the longest partnership of its kind in the UK.

Hallé musicians regularly visit thier care homes to conduct music sessions with residents as part of an extensive enrichment programme.

According to the orchestra’s education director, Steve Pickett, they wanted to see all residents have the chance to join in – even those living with severe physical disabilities.

He said: “As an orchestra we work closely with all our sponsors. We explained to the graduates at Siemens how we work with Pendine Park in taking music and the arts into care homes.

“We asked the graduates to help us come up with a piece of kit that would allow even the most disabled residents to join in. This is a project that started two years ago. The initial device was a wrist band that played musical notes as it responded to the movements of the residents wearing the band.

“That was successful but the engineering graduates have developed those ideas and come up with a new motion sensitive device that is more sensitive than the wrist bands.”

He added: “The graduates have come up with a remarkable bit of kit that means all residents will be able to join in, work with Hallé musicians and create unique sounds.

“The main thing is this device is more sensitive than the wristbands created in the first phase of the development. The hope is we can further develop this device so residents in any care home can use it to produce musical sounds.

“Today is a trial and the first time we have given residents the opportunity to test this new instrument. I have to say it seems to be working remarkably well and residents certainly seem engaged and able to use it despite whatever disabilities they have.”

Siemens engineering graduate Natalie Gristwood said: “Basically it is a small box which can be placed under the hand of a resident and will play the musical notes in response to the movement. So far, we can programme four instruments, drums, harp, xylophone and a Theremin which is an electronic musical instrument controlled without physical contact

“We can adjust the sensitivity of the device so if a resident has really limited movement, we can make it easier to use.”

Pendine Park’s artist-in-residence Sarah Edwards was delighted to have seen the project develop over the last two years.

She said: “The project is a continuation of our partnership with the Hallé orchestra. We want to ensure every resident has the opportunity to join in and get involved, alongside Halle musicians, in making music.

“The initial instrument that was in the form of a wristband worked really well. It’s now a case of seeing how this second phase will go.”

The device got a big thumbs-up from Mike Blakely and Tony Ithell, both residents of Pendine Parks Penybryn Care Home,  who had the honour of being the first to trial it.

Mike, a former cabinet maker from Bagillt in Flintshire, said: “It’s really good and easy to use. I enjoyed playing it. It’s not hard because you just hold your hand over the box and move your hand up and down or to the side and it plays the notes.

“It’s great as I played with the Hallé. I might bring a record out now! I’ll need an agent and a record deal.”