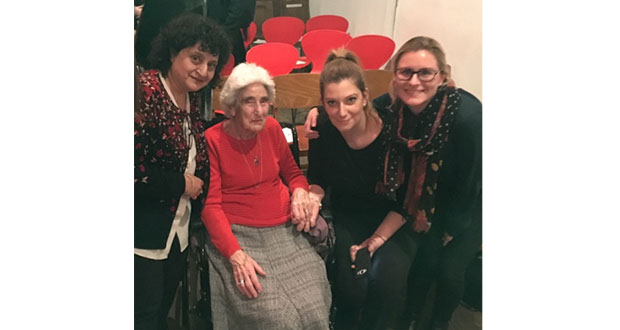 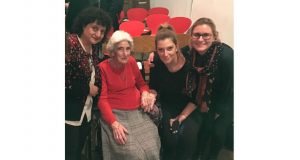 Kathleen Wood, who lives at Brook House Care Home in Wembley, has made her big-screen debut at the age of 96, featuring in a film about ten different women living in London.

The film, ‘Century: 10 Women x 10 Decades’, was created by Chocolate Films as part of their decade-long project, ‘1000 Londoners’. It provides an honest glimpse into the lives of ten women born in ten different decades.

Kathleen, who is the oldest of the 10 women in the film collection, attended the second public screening event on 30th January at Hackney Attic.

The film will be shown again at Hackney Attic on Wednesday 8th March, 7.30pm.

It was an unusual Monday night for Kathleen, Nathalie, Alison and Sorin, and not one they’ll forget in a hurry!

Kathleen’s segment is the first in the film and shows her discussing her life and her family with great humour.

Kathleen Wood said: “The whole experience was a treat from beginning to end. When I entered the venue, I got an overwhelming welcome. I only wished my husband was with me to join in this special moment.”

Alison Khurana, Activities Coordinator at Brook House said: “Kathleen champions women and was glad to be part of the journey expressed on the film.”

Nathalie Maris, who was at the screening with Kathleen, said: “Kathleen so enjoyed the evening! She was talking non-stop about it on our way back to Brook House Care Home! She felt like an absolute celebrity!

“We stopped for a McDonalds on the way back as well as she hadn’t had one in many, many years.”

Kathleen’s segment of the film can be viewed online here from March 16th: http://www.1000londoners.com/

Other women featured in the film include Paralympic athlete Susie Rogers MBE and Dame Jocelyn Barrow. Each woman featured brought something unique and their accounts showed great bravery, determination and humour.