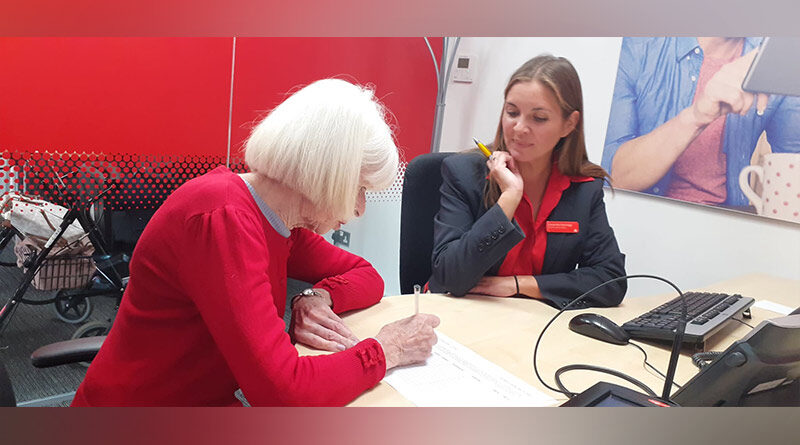 A resident at a Bognor Regis care home went back to her place of work and spent the afternoon on a trip down memory lane as part of a Seize the Day initiative.

Kay Walker, who lives at MHA Greenways spent some time at the Santander Bank site on the High Street in Bognor Regis.

Kay worked as a bank manager at the site for 30 years and was the first manager when the back opened.

The Seize the Day initiative encourages residents to re-experience activities or events from the past or to do something they would like to do for the first time.

She was accompanied to the bank by her husband Robin, who she met whilst working at the bank.

Kay was given a tour of the bank and spotted plenty of changes since she worked there.

Mr Walker said:
“Kay had a fantastic time at the Santander Bank, where she used to work as Manager.

“She worked at banks for over 30 years so it was lovely to reminisce about her days working there.
“The staff at the bank and at MHA Greenways helped to make the day a real joy, and it was great to see Kay in what used to be her natural environment.

“I’d like to say a big thank you to everyone involved in making the day happen.”

Cassandra Partridge, community engagement champion for Santander said:
“I was approached by Joanne who told me Kay wanted to come back to ‘work’ for the afternoon and we were more than happy to oblige.

“We are always looking for ways to work with the community and this was a great opportunity for us.

“Kay had a fantastic time and even wore red to match our uniform.

“She was very keen to see the different systems that we use now compared to when she worked here.

“It was really nice to see her reminisce and one thing that really struck us was her amazing memory.

“She was telling us how the building and the layout was different when she worked here, and we are all very proud of having her visit us.”

Joanne Mitchell, activity coordinator said: “Since visiting the back it’s all Kay has been talking about.

“She told everyone what she did and was very happy when she came back to the home.

“As soon as she arrived at the bank, she was taking in her surroundings and kept saying it feels like she has come back home.

“Whenever I do any activities, she is always well organised and still refers to herself as a bank manager.

“It was great to see her really enjoying herself and that’s what the Seize the Day initiatives are all about.”