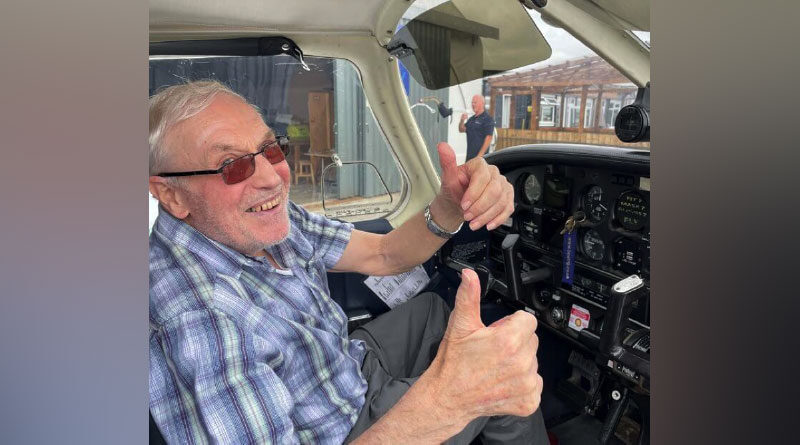 A care home resident in Basingstoke has completed a lifelong wish – and he’s now on a real high.

82-year-old Roger Mashall, a resident at Care UK’s Dashwood Manor, took to the skies and had his very first flying lesson.

When Dashwood Manor first opened in September 2021, the team installed a ‘Wishing Tree’, an initiative launched by Care UK which allows residents to suggest ideas for new hobbies they’d like to try, places they’d like to visit or even activities linked to past careers. This encourages residents to live fulfilling lives – from skiing to a fish and chip supper, no wish is too big or small.

After his friend and fellow resident, Dennis Moulton, jumped out a plane at 15,000 feet for charity earlier this year, Roger was inspired to complete his life-long dream which was to fly a plane.

The team wasted no time getting the wish off the ground and soon the day came for the flight. They arrived at Blackbushe Airport, in Camberley, at 10am and after some training on the ground, Roger took to the skies for a lunchtime flight.

Roger said: “It was a brilliant experience which I would do over and over again. To take control of the plane gave me a real sense of freedom and power. The views were spectacular and very green. I am so happy the weather was in our favour!”

“We are thrilled to have helped Roger complete his lifelong wish and it was wonderful to see the smile on his face as he landed after his flight.

“The team at Dashwood Manor have organised many wishes for residents in the past 12 months including the skydive for Dennis, a tattoo for Helen, a resident who wished for a tabby cat tattoo, and now a flying lesson for Roger. I am very proud of the team who consistently go above and beyond to make resident wishes come true.

“I cannot wait to see what wish we organise next – the sky really is the limit!”