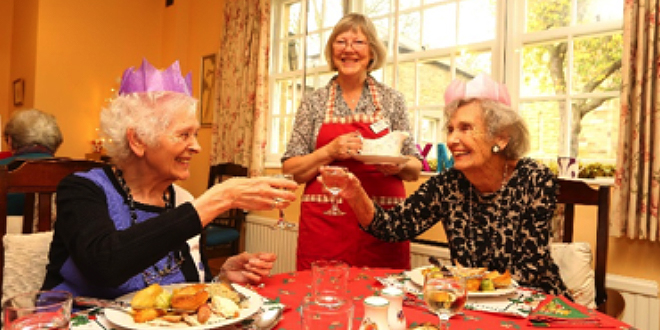 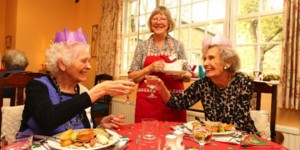 Record numbers of older people worried about being alone over Christmas have already contacted older people’s housing and care charity The Abbeyfield Society as its Coping at Christmas campaign gets into full swing.

Since the campaign launch in November, Abbeyfield has handled hundreds of calls from isolated older people who face being alone over the extended Christmas period. As a result, over 400 older people who would otherwise have spent the Christmas period without company are being welcomed into Abbeyfield houses the breadth of the country to enjoy festive events ranging from 1940s fancy dress parties to Christmas Day lunches and even overnight stays so they don’t have to wake up alone on Christmas morning.

Abbeyfield chief executive Natasha Singarayer said: “This has been the busiest opening to a Coping at Christmas campaign we have ever experienced. It’s fantastic that more and more people know they can reach out to Abbeyfield and be assured that a warm welcome awaits at their local Abbeyfield House.

“But what is particularly noteworthy is that people have been getting in touch earlier in the run-up to Christmas, showing that worries about being alone over the festive period don’t just revolve around December 25.

“Nine out of 10 older people we polled said that company is crucial to a good Christmas. Abbeyfield absolutely believes that no older person should be alone at Christmas time, unless they want to be, which is why we introduced our Coping at Christmas campaign five years ago.”

Iris, 86, from Accrington, Lancs, lives alone following the death of her husband of 51 years. Her brother died earlier this year, and she has no children, leaving her completely alone in the world. Iris, who is partially-sighted, pays someone to read to her for half an hour each evening, just so she can enjoy hearing a real person’s voice.

She said: “Christmas is a bad time for me – I have nobody to speak to. It reminds me of the people I’ve lost who aren’t here any longer. People say time helps to heal but I feel worse and more alone than ever before, especially at Christmas.

“I try to not bother about it being Christmas and make do with sending cards to pen friends. It’s the quietness and the nothingness of being here alone that gets to me most. I have the radio on from the moment I wake up and I’ve tried audio books, but it makes me feel even more alone, with an artificial voice in my ear.

“The nothingness I feel because everybody has gone just swamps you. It makes you realise how much I like being with people and having them around me. I’ll go to the shops and even after I’ve done my shopping I find myself sitting outside the supermarket to put off coming back to an empty house.”

But this year, thanks to Coping at Christmas, Iris will be enjoying the festive season in the company of others at her local Abbeyfield House.

And it’s not just older people who are contacting Abbeyfield to take part in Coping at Christmas this year. Whether prompted by the tear-jerking John Lewis TV advert highlighting the often hidden plight of loneliness and isolation among older people at Christmas, or by the growing profile of Abbeyfield’s campaign, the charity has also received increased enquiries from over 90 people who want to volunteer at its 500-plus houses and homes across the UK during the festive period.

Natasha Singarayer said: “We have around 4,000 committed volunteers of all ages who come into their local Abbeyfield houses throughout the year.

“We are really heartened by the surge of volunteers who have come forward wanting to help make a difference to the lives of older people this festive season and beyond. We’ve even had a family come forward whose four adult children want to help as volunteers, and we have overseas students who will be helping out.

“Christmas should be a season of togetherness and at Abbeyfield, we are doing our upmost to make that happen for older people. But our support continues long after the last piece of tinsel has been taken down, and we provide events and activities for older people in the community throughout the year.”