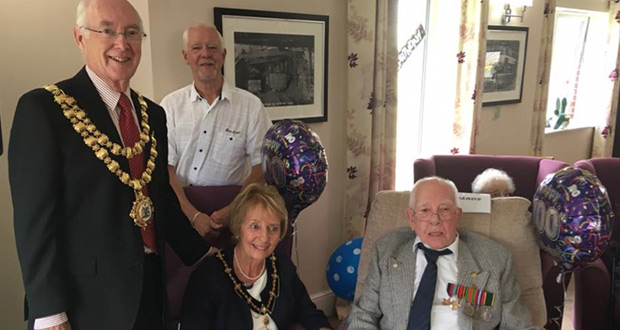 A veteran of the Burma War has celebrated his 100th birthday last month at his home in Hindley, Wigan. Fred Edwards, who resides at Ash Tree House care home, turned 100 on 26th June and celebrated with his family and friends, fellow veterans and the Mayor and Mayoress of Wigan.

Fred was born during the First World War in 1917, when Zeppelin airships were bombing Britain and rationing was about to take hold of the country. Fred has always lived in Hindley and attended All Saints School. He took up work as a miner for and then joined the Territorial Army in 1937, where he was enlisted to serve in Burma during the Second World War. He has since been commended for his efforts by being awarded the respected Burma Star Medal along with many other military honours.

Fred married Elsie Wild, from Ince in Wigan, in December 1946 and they had three children, Colin, Fred and Julie. Fred now has three grandchildren and three great grandchildren. He has lived at Ash Tree House for three years and was overwhelmed that staff at the home had organised a special party for him. Fred said, “I am so happy that everyone is here, and I am grateful to my family and the staff at Ash Tree House for all of their support. I have had a day to remember and even received a card from the Queen! There is no great secret to being 100 years old, although I will say that I have never smoked and I have tried to stay as active as possible.”

Staff decorated the home and even reserved Fred’s favourite chair for him for the day. The Kitchen Team made a huge cake and decorated it with 100 candles and Fred also received a second cake from Wigan Youth Zone which was adorned with the Burma Star. Wartime singer, LeAnn James, provided the entertainment and Fred sang along to his favourite tune, Old Man River, before tucking into a delicious buffet.

Kathryn Disley, Home Manager at Ash Tree House, said “Fred is such a gentleman and it was a pleasure to organise his party. He has seen so much change in his lifetime but he is a Hindley man through and through and we are all proud to have him living at Ash Tree House.” Ash Tree House provides residential and dementia care for 60 residents and is committed to offering them aspirational lifestyle choices. Breaking down the pre-conceived perceptions of care home life, the residents at Ash Tree House enjoy an active social environment with events, trips and daily activities on offer.