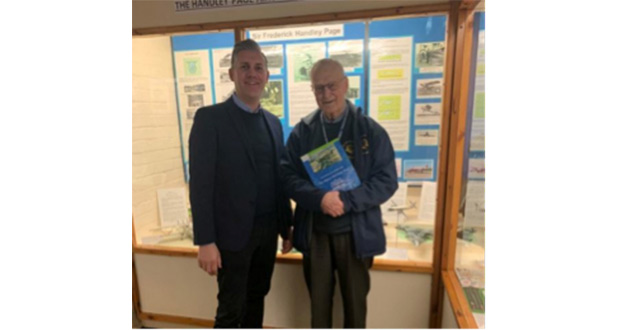 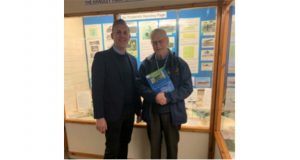 A brand new care home is being built by LNT Construction on the site of the Handley Page RAF repair site on Green Lane in Clifton, York.  Ideal Carehomes, who will operate the 66 bed home, have named the new building ‘Handley House’ to honour Handley Page who were credited to keeping numerous planes airborne in the Second World War.  The site was previously called the York Aircraft Repair Depot and was known locally as ‘The Yard’.

General Manager of Handley House, Michael Gledhill, was keen to visit the nearby Yorkshire Air Museum in Elvington to find out the full history of the site.  He said: “I had a great time at the museum and am very grateful to the staff there for showing me around.  The guys I met are extremely knowledgeable about the war and the local area.  It was so interesting to look through all the archive pictures and maps of Clifton Airfield.   I am hoping we will be able to use some of their archive memorabilia within the home which is really exciting”

Norman Spence, who volunteers at the Yorkshire Air Museum and penned the story of Clifton Airfield in his book, ‘The Airport That Never Was’,  explained the relevance of the hangars to local history: “The Yard was run by Handley Page, one of Britain’s major aircraft manufacturers, and during the Second World War the hangars on Green Lane are where they used to repair the many Halifax Bombers stationed at nearby airfields which included 4 Group RAF and 6 Group Royal Canadian Air Force.  If they were shot-up from raids and couldn’t be repaired on the field they were sent to the Yard for repair.”

Construction started on the residential care home last year and the building has been rapidly taking shape behind the hoarding.  Once open, Handley House will provide person-centred care to residents using the latest care plan technology.  The facilities will include a cinema room, café area and hair salon as well as spacious en-suite bedrooms, light and airy social spaces and landscaped gardens.  Handley House will also provide peace of mind to residents and families with their unique inclusive fee offer.

Michael continued: “The fact that The Yard made a vital contribution to keeping the RAF flying during the war makes it feel like a real honour to be opening our care home on such a prestigious site.   I am sure the fascinating history will provide a real talking point for our residents and their families, and we will certainly take our new residents over to the museum so they can see exactly what used to be on the site of their new home!”