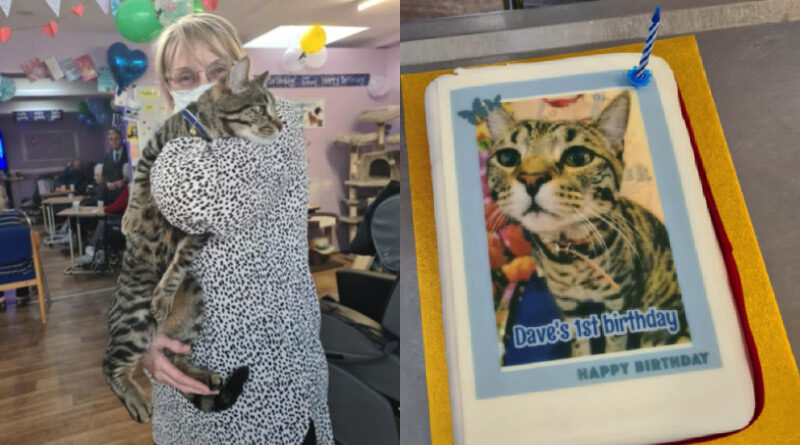 Residents and staff of the Edensor Care home in Clacton on Sea were sick with worry when their beloved cat went missing on 6 March, the day before his first birthday. They had been planning this special cat’s birthday party for weeks and were so upset when he hadn’t been seen for over 24 hours.

Dave is no ordinary cat. He joined the Care Centre when all the residents were given the opportunity to ask for a wish in early 2021. Resident Diane Groom asked for ‘a cat to care for and love’ and much to her surprise a beautiful kitten that the home named Dave arrived.

Over the past year Dave has really made himself at home. He loves, sleeping on the Manager’s chair, cuddles from the residents and staff and lots of lovely food from all his admirers.

Lindsey Milliken, Deputy Manager, Edensor Care Centre, said, “We had been planning Dave’s party for weeks so when we discovered that no one had seen him for over 24 hours, which was totally out of character for him, we hastily made posters and I set off scouring the local area to find him. What a relief it was when he finally reappeared later that day, tired and very hungry and we could have his party.”

Dave, who appeared on the BBC news in June 2021 and became the star of one of their top five most watched videos, has his own Instagram page ‘DiagramaDave’ and has received cards from all over the country. The Care Home presented him with a birthday cake and a selection of new toys, and the Home was delighted to receive a portrait of Dave painted by a WWII veteran who loves animals.

Lindsey continued, “Dave has really made a difference to everyone here and we are so relieved that he is home. Seeing the residents faces light up when he is about is magical, and he brings immense joy and happiness to residents and staff. Many of the phone calls we receive from prospective new residents ask if we still have Dave – he really is a star.”

Many of the residents at Edensor have dementia, this is what Dave means to them. Sue:  “I love Dave and I hope he has a very long life.” Maureen: “It feels like my own home seeing Dave. I love the fact that he is famous.” Shirley: “I am so excited to see Dave ever day….I am more excited that he is becoming more famous than Clacton Pier.” Chaz: “I think it’s great having Dave around Edensor I love to hear he is famous. Today Clacton tomorrow the world.” Diane: “I love him so much.”