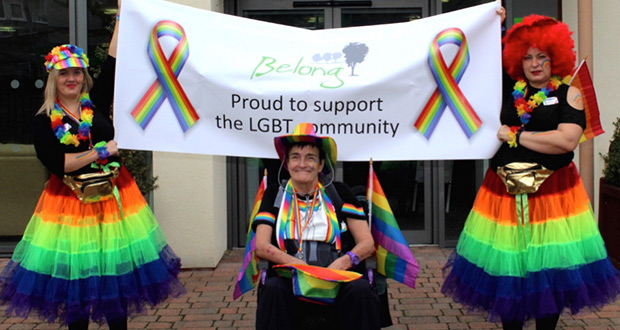 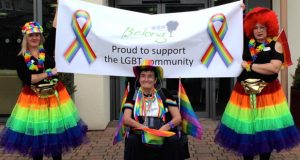 Jane, who is an active member of the LGBT community, attended the parade with staff members from specialist care village, Belong Wigan, who came out in force, waving flags and banners in support of Pride. The staff members had recently become ‘Older & Out Champions,’ by taking part in an Age Concern LGBT awareness session, in which they learned ways to emotionally and physically support older people who identify as LGBT.

The care village group joined the parade at Mesnes Park, where it was officially opened by Ian McKellen and marched right the way through the town centre. Each participant carried banners and flags and got into the spirit of the afternoon by wearing brightly coloured clothing and singing along to the music that was ringing through the town.

The highlight of the day was Jane’s meeting with Ian McKellen, who took the time to talk to her about growing up in Wigan and his experience of being an older LGBT activist.

Marie Calderbank, Experience Coordinator at Belong Wigan, said: “We all had a fabulous time marching in the first ever Wigan Pride parade; it was an honour to be involved. Inclusivity and diversity is very important to us at Belong and this was a perfect opportunity to celebrate our values with the Wigan LGBT community. We look forward to being involved with Pride in the years to come!”

Jane Chadbond added: “I had a great time at Wigan Pride and particularly enjoyed getting the opportunity to talk to Ian McKellen. Working with the LGBT community has been a very big and important part of my life and it was lovely to share this with the village staff members who pulled out all of the stops to organise our participation in the march. The parade certainly brought back many fond memories of my days working as an LGBT youth worker and attending Pride in years gone by.”