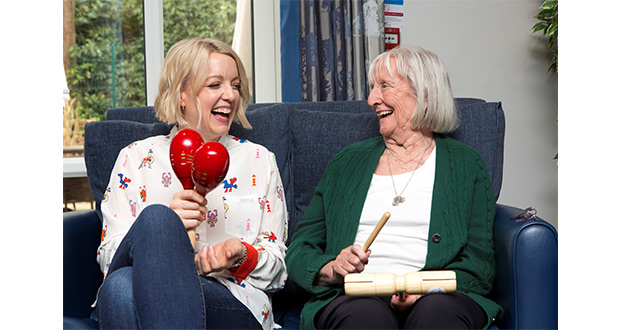 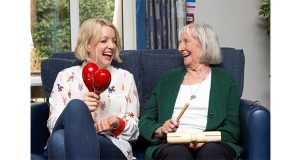 BBC TV and radio presenter Lauren Laverne has been appointed as the ambassador for Music for Dementia 2020, a new campaign calling for music to be accessible to everyone living with dementia.

Lauren, who hosts Radio 6 Music’s flagship Breakfast Show, has joined forces with Music for Dementia 2020, to highlight the powerful impact music can have on people living with dementia.

The campaign, which is also backed by Secretary of State for Health and Social Care, the Rt Hon Matt Hancock MP aims to make music available to people living with dementia and their carers across the UK.

Lauren, who has carved out a career as one of the UK’s leading music broadcasters and is currently presenting the UK’s greatest radio show of all time* BBC Radio 4’s Desert Island Discs while Kirsty Young is on leave, said the issue is close to her heart.

Lauren said : “I can’t imagine my life without music. We all instinctively know how important music is, and how beneficial it is for our wellbeing. It connects us to others, to our memories and boosts our mood.

“That’s why it’s a central part of every important human interaction – from socialising with friends to weddings, even funerals.

“But because music is everywhere, we sometimes take it for granted, and that’s a huge mistake.

“There is now a vast amount of scientific research exploring the enormous benefits music has for cognitive, physical and mental health.

“Music’s connection to memory is something we intuitively understand and celebrate every day on radio shows like mine, but we are failing to use this powerful tool in the fight against dementia.

“Music should be made available to everyone living with the syndrome.”

Lauren will bring her experience and insight from the music industry to her role with Music for Dementia 2020 – an initiative created and funded by The Utley Foundation. She will help shape the campaign over the course of two years and increase awareness around how and why music can be used as an integral part of dementia care.

Music for Dementia 2020 is a nationwide campaign backed by The Utley Foundation, a charity founded in 2014 by Neil and Nicky Utley.

Neil Utley, Founder and Trustee of The Utley Foundation, said: “We’re thrilled to have Lauren Laverne on board as an ambassador, who brings vast experience from the music industry. I know that she will be hugely influential in helping to spread the message about the impact music can have on the quality of life for people living with dementia.

“People with dementia often live in a silent world. Yet music can be used to minimise their day to day anxiety. The ability to connect to music is an innate aspect of being human and there is substantial evidence to demonstrate that.”

The Music for Dementia 2020 campaign also has the backing of the Secretary of State for Health, Matt Hancock, and Baroness Sally Greengross, Chief Executive of the International Longevity Centre – UK, who led a sector-wide commission into music and dementia, funded by The Utley Foundation in 2018.

Health Secretary Matt Hancock, said: “Dementia can have a devastating impact on people’s lives but music has been scientifically proven to bring calm, reduce agitation and support those affected to cope better with symptoms.

“I back Music for Dementia 2020, which offers a great opportunity for people with dementia, their families and carers to access music and get good value, easy-to-use social prescription that I fully endorse.

“It will help us deliver more person-centred care, a key part of the NHS’ Long Term Plan.”

Baroness Sally Greengross said: “Despite growing evidence of the value of music for people with dementia, we are not seeing enough being done to improve access to appropriate music-based activities.

“One of the key recommendations from the commission was to improve public awareness around the power of music. We hope that through this partnership, Lauren Laverne and Music for Dementia 2020 will shine a light on the value of music as an intervention.”

Grace Meadows, Programme Director at Music for Dementia 2020 and a senior music therapist at Chelsea and Westminster Hospital, said: “A song has the power to instantly transport us to a different place and time, and can have the most profound effect on people living with dementia and their carers.

“We want everyone in the UK living with dementia to have access to the music that means most to them and for it to be accessible in the most appropriate and effective ways.

“For some, this will mean ensuring they have the right technology – allowing them to enjoy their favourite music wherever and whenever they want. For others, it means being able to attend music groups and participate in music-making. For some, it may mean working with music therapists.

“Music for those living with dementia isn’t a nicety, it’s a necessity.”

Music for Dementia 2020 is seeking to lead the field in music and dementia care, by creating a national taskforce of stakeholders who can effect change. This includes leaders from across the music, health, social and care sectors, MPs, and those living with dementia.

There are currently over 850,000 people living with dementia in the UK – supported by 700,000 informal carers who need support to keep caring for loved ones.

Dementia remains one of the leading causes of death in the UK, costing the economy £26bn – a figure set to more than double to £55m by 2040.

Recent statistics also revealed there are a further estimated 42,000 younger people (aged under 65) in the UK with dementia, which accounts for around five per cent of those with dementia.

The Music for Dementia 2020 campaign will seek to build the UK’s first network for music and dementia programmes, support carers and look at how to improve the quality of life for people living with dementia, by making music readily available and accessible for all.

People with dementia and their families are being asked to sign up via the website to join the Music for Dementia 2020 taskforce to shape and inform the campaign.

Music for Dementia 2020 will be hosting a summer reception where representatives from the music industry, clinicians, practitioners and politicians will hear the goals of the campaign and have the opportunity to share ideas.

Visit http://www.musicfordementia2020.com/ for more information, to sign up to the Music for Dementia 2020 newsletter and to become part of the taskforce.