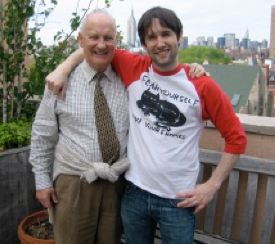 Tim Wheeler of the band Ash has recorded a heartfelt debut solo album in response to the loss of his father, George, who had dementia.

During the course of the 11 songs which make up the album Lost Domain, Tim charts the progression of his father’s condition, battles to come to terms with his death and celebrates the strength of his family.

Tim will donate a percentage of the proceeds from the sales of Lost Domain (out on 10 November) to Alzheimer’s Society.* He is encouraging people to find out more about dementia and the small ways they can help by joining the Alzheimer’s Society Dementia Friends programme – the nation’s biggest ever initiative to change people’s perceptions of dementia.

The Ash frontman, who was behind a string of 90s chart hits including Girl from Mars, Oh Yeah and Shining Light, has been supporting Dementia Friends since May this year. Tim co-produced the music for the Dementia Friends TV advertisement which features a host of celebrities including Lilly Allen and Coldplay’s Chris Martin singing along to the Beatles classic, With a Little Help from My Friends.

Tim says he hopes that Lost Domain will do more to raise awareness about dementia:

‘I started writing the songs for the album during the time when my father was first in hospital and his dementia was progressing. I came home one day from visiting him and I began to write the song Medicine as I was trying to understand what I was seeing, the experience I was going through and what my dad was going through. It was a really hard time but the closeness within my family made it a powerful bonding time as well.

‘After losing my father to dementia, I felt the need to personally do something to fight the condition. My friend Neil Hannon from The Divine Comedy’s father also has Alzheimer’s so we put on a concert in Belfast in November 2011 with The Divine Comedy, The Undertones and Ash to raise funds and awareness for Alzheimer’s Society.

‘Since then I’ve had close links with Alzheimer’s Society, and this year am involved with their Dementia Friends campaign. I’m proud to be a Dementia Friend and continue raising more awareness with the album Lost Domain.’

‘It’s great to have an artist as talented as Tim raising awareness of dementia through his music. The album touches on the huge range of emotions people often go through when a person close to them has dementia, and seems a fitting tribute to a man who clearly meant so much to him.

‘Dementia touches the lives of millions of people across the UK, but through the Dementia Friends programme we are able to tackle the stigma and lack of understanding that means many people with the condition experience loneliness and social exclusion.’

Tim is supporting the Alzheimer’s Society Dementia Friends programme. Dementia Friends is a joint initiative with Public Health England funded by the Cabinet Office and Department of Health which helps people to understand a bit more about dementia and the little ways they can help.

*10 per cent of the proceeds from sales via Pledge Music will be donated to Alzheimer’s Society. Tim will also be making a donation from the royalties of the sale of this album outside of Pledge Music sales.