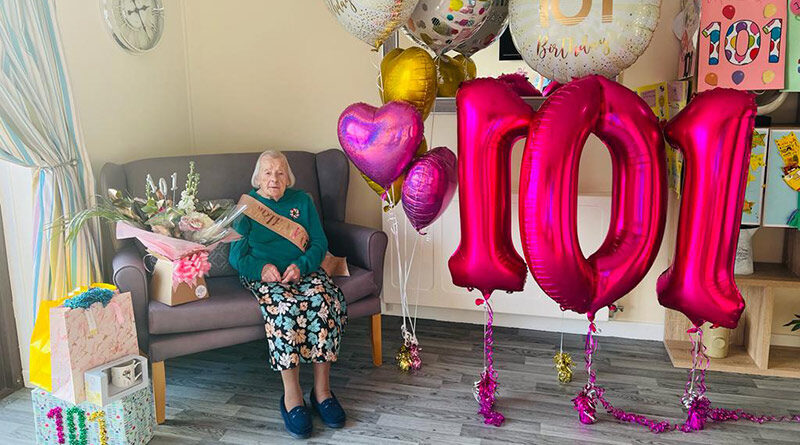 A care home in Newark has been blown away by the support received from the local community after more than 1,500 birthday cards were delivered to one of their beloved residents.

Red Roofs Residential Care Home on Grange Road in Newark launched an appeal in January for Gladys Welch’s 101st birthday. The original target was set for Gladys to receive 101 cards from in and around Newark, but it soon turned into a global appeal. More than 1,500 cards from across the UK, Denmark, Northern France, the Isle of Wight and the USA arrived safely to the home for Gladys to open on 29th January.

Born in 1921 and originally from Collingham, Gladys lived in Bakers Mill – named after her mother’s family until she was 11. Later in life, Gladys worked at Webb Woollies before moving to Ransome and Marles, where she worked for a number of years. Whilst working at the factory during World War II, Ransome and Marles was bombed by the Luftwaffe, resulting in 41 fatal casualties. Gladys is a well-known bombing raid survivor and talks openly to staff about her life experiences and how she ran to air-raid shelters for safety. Trish Smith, general manager at Red Roofs Residential Care Home said: “Wow. We cannot say thank you enough for everyone’s generosity. We have been receiving card deliveries since the beginning of January and they’ve completely filled our home! As soon as the cards began to arrive, Gladys opened them with a smile on her face, and we displayed them in our living areas – some of them are absolutely beautiful. One school sent in more than 300 handmade cards.”

“This last month has been absolutely incredible and none of us will ever forget the memories we’ve created. We have been supported not only by those living in Newark but by people who haven’t ever heard of Red Roofs Residential. I am so pleased with the response and would like to say a huge thank you to everyone who got involved and shared our request – Gladys’ 101st birthday and story touched so many, and we’re equally as touched.”

“The whole of January has truly been overwhelming and we are delighted with the response to our appeal. I’d personally like to thank each and every person who kindly sent Gladys cards, gifts, cakes and flowers.

“One of our residents put it very eloquently, ‘people really shared and sent their love.”

The care home was also approached by a number of entertainers who wanted to provide live performances for Gladys as well as a very special visit from Roy Briggs-Price and his miniature horse named Puppy.