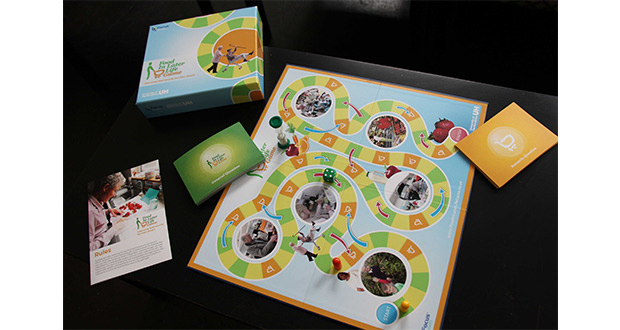 The University of Hertfordshire is celebrating the first UK Malnutrition Awareness Week, running 1-7 October 2018, with the launch of a new educational board game. The Food in Later Life Game will help people learn more about the causes of malnutrition in older people and the actions they can take to help prevent and manage it.

Malnutrition affects an estimated one in 10 people over the age of 65 in the UK (around 1.3m) and is a major public health issue estimated to have cost £19.6 billion a year in England, around 15% of the total expenditure on health and social care**. The vast majority (over 90%) of older people who are malnourished are living in their own homes where the signs and symptoms of malnutrition often go unnoticed and unrecognised.

Researchers from the University of Hertfordshire’s Centre for Research in Public Health and Community Care (CRIPACC) sought to develop a fun, interactive way for people to engage with findings from their research into food and older people, which was funded by the Food Standards Agency and the Economic and Social Research Council.

Wendy Wills, Director of CRIPACC at the University of Hertfordshire, said: “Sometimes it’s easy to think that the solution to help older people access food is simple – organise ‘meals on wheels’ or do someone’s food shopping for them – but this game, based on our research study, shows that people’s lives are complex and there are costs as well as benefits to making changes to the way people get food as they age.”

The Food in Later Life Game, which has been co-produced with Focus Games who are educational board game specialists, has been officially launched at a Malnutrition Awareness Week event on Wednesday 3 October. The community event, which was attended by Councillor Richard Roberts, from Hertfordshire County Council, had been organised by local meals on wheels providers Hertfordshire Independent Living Service; it offered local residents an opportunity for older people to receive a free malnutrition screening test, conducted by the University’s students, and play the board game.

Cllr Roberts, who played the Food in Later Life Game with the game’s co-creators Wendy Wills and Angela Dickinson, said: “This game asks, and answers, questions around the issue of food and older people and helps those working with older people to gain a better understanding of the issue. Ultimately this is the best way of keeping people fit and fed and the game really helps for that.”

The board game helps players understand the challenges faced by older people when buying, cooking or eating food. It also helps them to discuss what individuals and organisations can do to ensure older people have access to a safe and nutritious diet, and are able to continue to enjoy food in later life.

The game has been designed so that it can be used by supermarkets to help train their staff to understand how a few changes in their approach could make it easier for older people to access food. It is also intended to be used by people working in numerous professions, including social care staff working in the community, healthcare staff including community, mental health and practice nurses, and people working in the hospitality and catering industries. Additionally, the game is a training tool for students studying dietetics, social care, nursing or hospitality; community groups, such as meals on wheels or lunch group providers; and volunteers working with older people.

CRIPACC research into food insecurity in older people has previously been used by an All Party Parliamentary Group (APPG) to explore Hidden Hunger and Malnutrition in the Elderly.

The Food in Later Life Game can be purchased online at: https://shop.focusgames.com/collections/diet-nutrition/products/food-in-later-life